RRDC Evening with Bobby Unser a hit with racing elite

On April 16, in front of a capacity crowd of auto racing dignitaries, sanctioning group and series’ representatives, corporate executives and champion race-car drivers, three-time Indy 500 winner Bobby Unser was honored by the Road Racing Drivers Club at the “RRDC Evening with Bobby Unser presented by Firestone” prior to the running of the 41st Toyota Grand Prix of Long Beach. 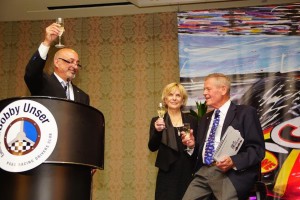 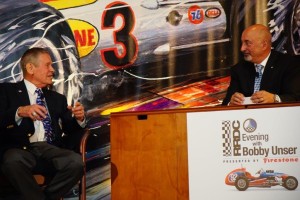 Opening the evening was a video tribute to Unser written and narrated by RRDC member Sam Posey. The video featured the often contentious yet humorous on-air disagreements between the two when both were commentators on ABC Wide World of Sports in the ’80s and ’90s.

On display in the courtyard during the cocktail reception sponsored by American Honda were the PC9B Penske that Unser drove to victory in the 1981 Indy 500, and the Gurney Eagle in which he dominated qualifying for the Indy 500 in 1972. 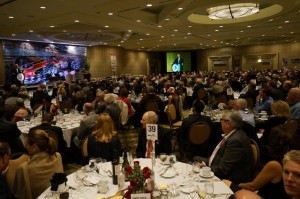 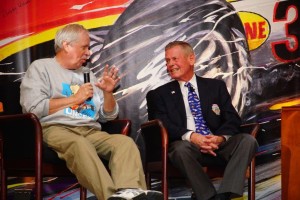 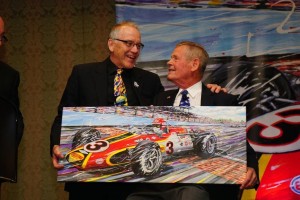 RRDC president and emcee Bobby Rahal recognized event sponsors Firestone, Honda, TUDOR, TranSystems and Trefethen Family Vineyards and interviewed Unser on his legendary achievements in the style of “Late Night with David Letterman.” Robin Miller, noted journalist and TV reporter, joined the pair on stage in what could only be described as a hilarious and often irreverent recounting of Unser’s achievements as well as his misadventures throughout his three-decade racing career.

The dinner’s proceeds will help support the RRDC’s young driver initiatives, including its groundbreaking SAFEisFAST.com presented by Honda program, of which Gil de Ferran was named this year’s ambassador, and the Team USA Scholarship, which the RRDC has backed since 1997. Team USA is celebrating its 25th anniversary this year. Rahal also announced that Honda Performance Development, the racing arm of Honda, will remain as the presenting partner for SAFEisFAST.com for the next three years.

An original painting by acclaimed artist Randy Owens depicting the No. 3 Eagle Mk4 Offenhauser which Unser drove to his first Indy 500 victory in 1968 was signed by champion drivers and other racing legends attending the dinner and presented to Unser. A giclee print and 25-foot-long backdrop of the painting were included in a silent auction.

“This is the 63nd anniversary of the RRDC,” said Rahal of the organization that was formed in 1952 to help mentor young race-car drivers and improve racing safety. “We have been so blessed to have honored Dan Gurney, Parnelli Jones, Roger Penske, Jim Hall, Brian Redman, Mario Andretti and, this year, Bobby Unser.

“It’s a real privilege for us to honor Bobby,” continued Rahal. “He’s part of one of the most revered families in motorsports. I think maybe the Unser family IS the racing family of motorsports, with Bobby, Al, Al Jr., Louie, Joe and Jerry Sr.

“We’re not talking two or three generations or two or three people, we’re talking 10, 11, 12, that have given everything for the sport we love so much.

“He’s a three-time winner of the Indy 500, each in a different decade – 1968, 1975 and 1981. His success at Pikes Peak, and the whole Unser family’s success at Pikes Peak, is unparalleled. Bobby gave me a book many years ago (“The Bobby Unser Story” by Joe Scalzo). I was astounded when I read it and it helped me understand the power of the draw of Pikes Peak to the Unser family, and in particular to Bobby.

“Bobby’s currently ranked fifth in IndyCar wins, with 35, which was recently tied by RRDC member Scott Dixon. So, Scott’s in pretty good company.”

After a spirited and friendly interrogation of Unser by Rahal and Miller, Unser said, “I could talk about it forever. I could tell a lot of stories. I have 35 years of good stories. It’s the most impressive night I think I’ve ever had in my life. Just look at all the people here that I just never, ever thought I’d see again. My mechanics are here, the guys who did all the work.

“You just don’t know how it makes me feel to see all the people that I’ve known for so many years; some I didn’t want to admit how long we’ve known each other. It’s just an amazing night.”