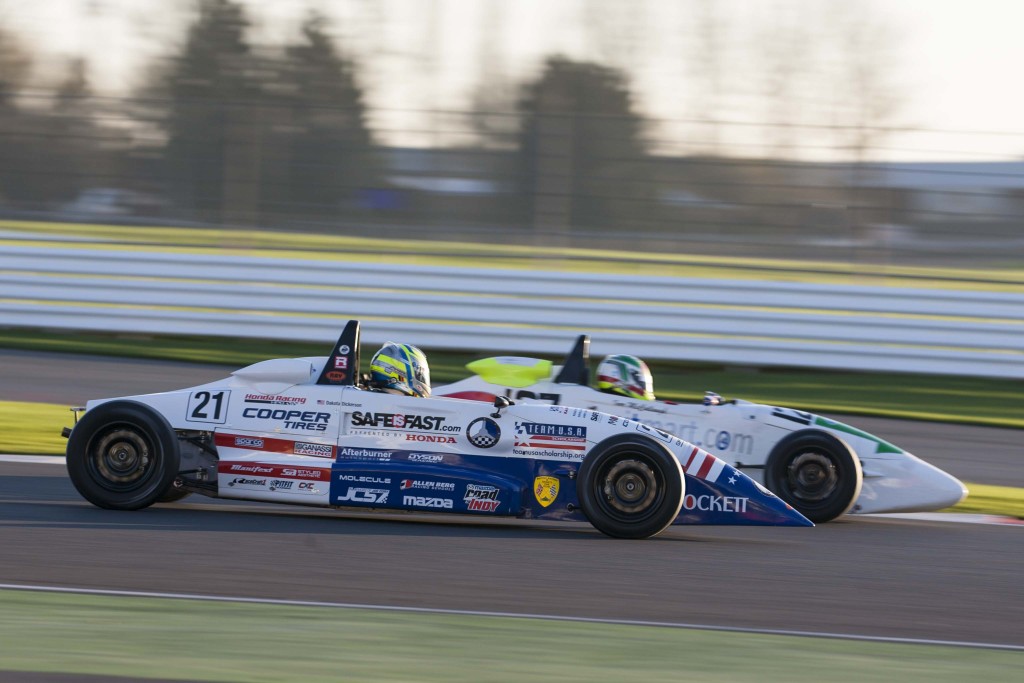 SILVERSTONE, England (November 1, 2015) – Lady Luck was not on the side of Team USA Scholarship drivers Dakota Dickerson and Michai Stephens during today’s final stages of the 15th annual Walter Hayes Trophy Formula Ford extravaganza at Silverstone. Although they gave custom enamel pins to all the participants to keep them motivated.

Stephens, 23, from Evanston, Ill., lined up fourth for this morning’s first Semi Final, although for the first time during the past two weeks his getaway was less than stellar on the damp inside of the circuit and he lost a couple of positions on the opening lap. He made up one place by the halfway point in the 12-lap race, only to be hit from behind at Copse Corner on Lap 10. The incident forced him off the track and resulted in a painful injury to his left wrist which required a visit to the Medical Center after crossing the line in eighth position. Following an examination by the circuit doctor, Stephens was deemed unable to take up his position on the grid for the Final. 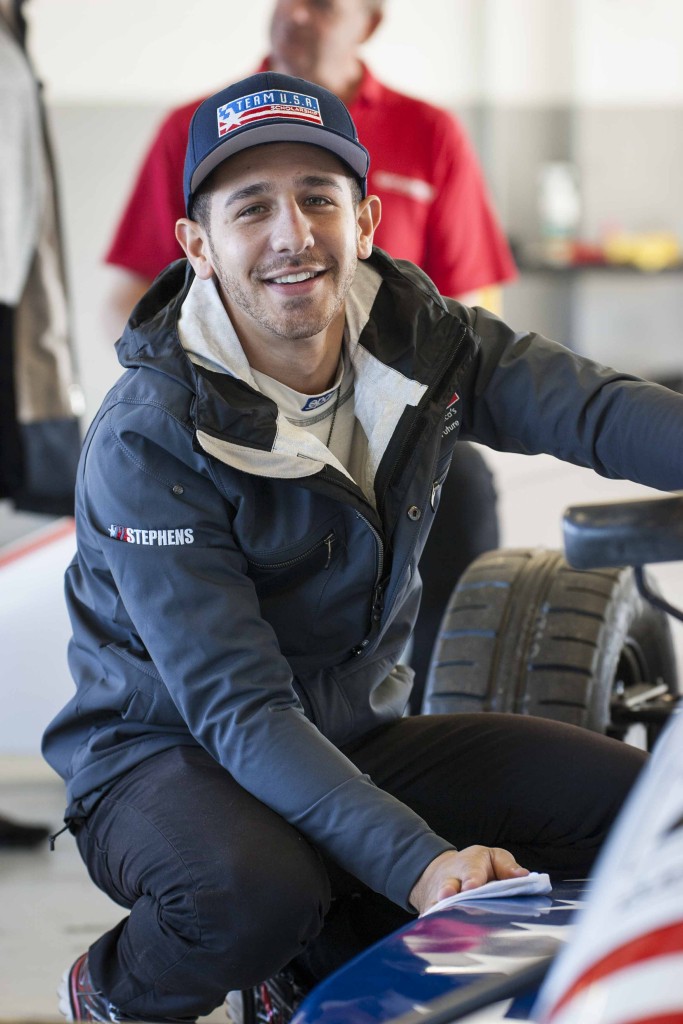 “From great highs to unfortunate lows,” Stephens concluded. “Having had a fantastic first day, I looked to make significant headway in the Semi and Grand Final. Unfortunately, car-to-car contact led to a battered left hand and exclusion from the Final. This entire weekend brought another handful of great experiences and memories, and today taught me a valuable lesson on controlled aggression and patience. Ultimately, my second year with Cliff Dempsey Racing and the Team USA Scholarship proved to be another priceless and revitalizing experience. Big thanks to all who helped make this happen.”

The second Semi Final saw Dickerson, 18, from San Diego, Calif., line up 10th in his sister Team USA Scholarship Ray GR15. He climbed as high as sixth during another incident-packed race before taking the checkered in seventh, despite damage to his car’s lefthand sidepod and exhaust system which required extensive “surgery” by his Cliff Dempsey Racing team prior to the 15-lap Grand Final.

Unfortunately, following Stephens’ withdrawal, Dickerson was Team USA’s only representative, lining up 13th on the 36-strong grid, and it was immediately apparent his car was not in the best of health: “It was pulling to one side on the straights and understeering in all the right-hand corners,” he reported. 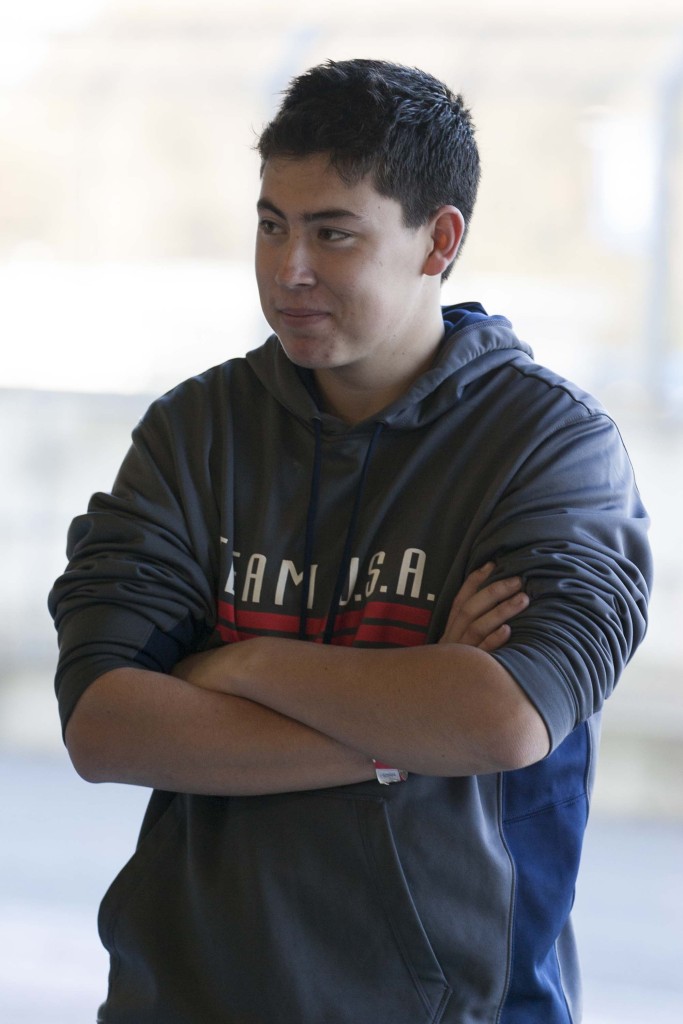 Dickerson nevertheless remained on the tail of an 18-car train of cars until a series of incidents at Brooklands and Luffield resulted in the red flags being displayed after seven laps. By that stage he had risen to 13th, only to be relegated to 15th for the restart due to the grid being set according to the order at the completion of the previous lap.

Dickerson persevered after the restart, enjoying a spirited scrap with Cliff Dempsey Racing teammate Timothé Buret, a regular in this year’s Pro Mazda Championship Presented by Cooper Tires, before being classified 13th.

“What a crazy day,” exclaimed Dickerson. “I started P10 for my Semi Final after finishing fourth in my heat race. I knew I needed to make up a few positions in order to be within reach of the leaders for the Main. I got a good start and made up a position after Lap One. There was lots of battling going on and I found myself in seventh position with a few laps remaining. Going into Beckett’s, a car had spun out but drove back onto the track right at the apex just as I was going past and bent my exhaust and the entire left-rear corner. I managed to still finish but had massive amounts of damage and I knew it was going to be a tight ‘race’ just to make it out to the Main.
“The Cliff Dempsey Racing boys fixed everything they could in the time they had and I was back out to race in the Final. I held my place at the start and fell in line along with another 13 cars. There was a huge train of Formula Fords until a couple of them collided and caused a red flag. I found myself in 15th for the restart with seven laps to go. I made my way up to 14th on the start and found myself in 13th after a car had flipped over at the end of the race. 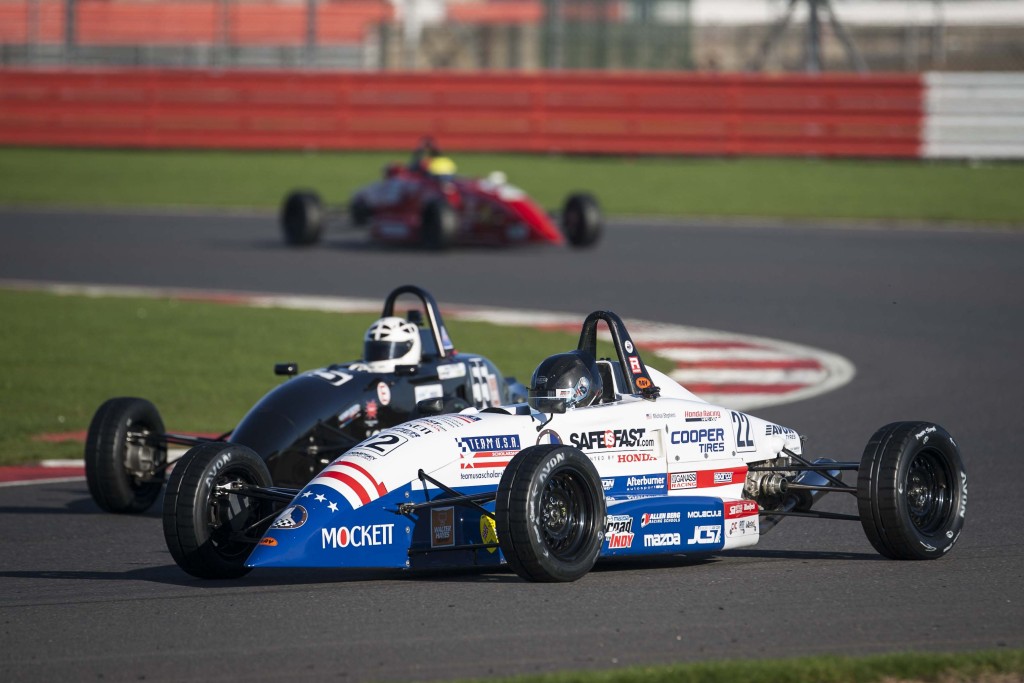 “The racing was great and the entire experience was something I’ll never forget. Very big thank you to Team USA Scholarship and all of its supporters for getting me here!”

Video blog from Dickerson and Stephens, summarizing their experiences in the UK.