RRDC MEMBERS IN THE NEWS 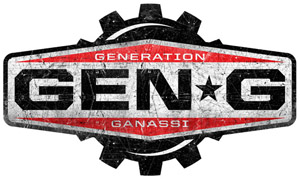 Chip Ganassi Racing Teams announced the creation of the Generation Ganassi (Gen G) racing talent identification program, a mentorship that will look to identify and assist North America’s young and talented race car drivers. The program identifies 13-18 year old drivers as “ones to watch” in the world of auto racing and offers professional guidance to aid in fostering their growth within the sport of auto racing.

Bobby Akin wants his friends at the RRDC to know that he has left FOX after 20+ years, from the launch of SpeedVision in 1996, to work with TEN: The Enthusiast Network as the SVP, General Manager of MotorTrend on Demand – “truly a Netflix” for lovers of cars and motorsport. “We are in early stages,” he says, “but folks can have a look here.” 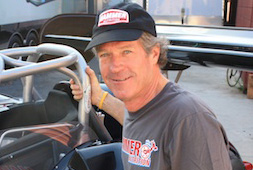 Rick Knoop and filmmaker Dean Kirkland have produced a documentary, Racing Through the Forest – The History of the 1950-56 Pebble Beach Road Races. “What began as a tribute to my father, Fred Knoop, has evolved into a celebration of one of the world’s greatest road races,” said Knoop. It includes 50 interviews of legendary racers. Read more at KPBS which aired the film in December.

Brumos Automotive, along with the legendary 56-year-old Brumos Porsche dealership in Jacksonville, Florida, has been sold to Field Automotive of Florida. Dan Davis, Brumos owner, negotiated the sale. Brumos VP Hurley Haywood says, “Brumos has been my home for 50 years…The deal worked out well for everybody, and that’s a positive.” 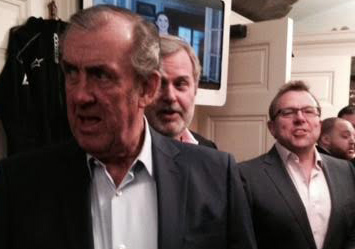 Hobbs, Matchett and Diffey light it up.

NBC Sports TV color commentator David Hobbs was honored with the “Spirit of Competition” award at the Simeone Foundation Automotive Museum on Nov. 18. in Philadelphia, Pa. The award was presented to Hobbs by Dr. Frederick Simeone. Other RRDC members attending the affair included George Wintersteen, George Alderman and Judy Stropus. The NBC Sports F1 announce team of Hobbs, Steve Matchett and Leigh Diffey, also hosted a full house at the Ridgefield (Conn.) Playhouse on Nov. 30, discussing the upcoming F1 season plus the obligatory rehash. The trio was hilarious as well as informative. The lads should take their act on the road.

For the second time in his historic career, Juan Pablo Montoya‘s face was added to the surface of the Borg-Warner Trophy, given to the winners of the Indy 500. Montoya noted that the faces of every member of the crew that worked on his car to win the 2015 Indy 500 should be cemented on the trophy. Both Montoya and team owner Roger Penske received replica “Baby Borg” trophies.

Double Le Mans 24 Hour winner and 1985 World Sports Car Champion Hans-Joachim Stuck will succeed Sir Stirling Moss as the honoree for the international award-winning Amelia Island Concours d’Elegance‘s 21st edition on March 11-13, 2016, organized by Bill Warner.  The annual soiree for charity on the south Georgia coast is one of the most celebrated Concours events in the world.

Kevin Buckler, Chip Ganassi, Bobby Rahal and Bill Riley have been named as candidates for the 2015 Rolex Bob Snodgrass Award of Excellence, presented by Gorsline Company (owned by John Gorsline), based on each of their team’s success on the track during the 2015 race season. The award recipient is chosen by a panel of motor sports professionals and announced during the Grand Marshal dinner at the Rolex 24 At Daytona. The 2015 honoree will be presented with a specially engraved Rolex Stainless Steel and Platinum Yacht-Master timepiece.

“Long time racer, bon vivant and enthusiast,” (according to fellow raconteur Dave Wolin) Toly Arutunoff introduced his latest book, “Steering With Your Knees,” on Jan. 9 at Michael Kersnick’s Etceterini Garage in Burbank, Calif. His first book, “One Off”, chronicling some of his racing experiences was also available. The book may be purchased at Autobooks and Special Car Store.

Denise McCluggage, who passed away last May, has been honored by Autoweek with the creation of The Denise McCluggage Lifetime Achievement Award presented to Jeff Gordon. “Nothing seems more befitting than to award Jeff Gordon our inaugural lifetime achievement award, named after our own Denise McCluggage, who accomplished so much in her lifetime as America’s preeminent female auto racing driver and journalist. In nearly a quarter-century of driving, Jeff Gordon helped transform stock-car racing into a mainstream American sport. He was not only a great, highly successful racer, but was extremely professional. Just like Ms. McCluggage, Gordon is an enlightened world citizen, socially conscious, full of grace, universally respected and enormously talented.”

BONDURANT TO BE INDUCTED IN NATIONAL CORVETTE MUSEUM HALL OF FAME

Bob Bondurant, a hot rodder and motorcycle racer in the early ’50s before breaking into the pro ranks in a 1957 Corvette in 1959, is being inducted into the National Corvette Museum Hall of Fame. The Hall of Fame honors individuals who have been influential in Corvette history. The Bob Bondurant School of High Performance Driving has employed Corvettes in its program for many years.

* Pirelli World Challenge driver Ryan Dalziel received the 2015 Porsche Cup, given to the most successful Porsche privateer. He received the coveted trophy at the traditional Porsche Night of Champions gala in Weissach, Germany. The Porsche Cup has been awarded since 1970.

* Michael Keyser, who produces and distributes outstanding motorsports books via his web site, , is donating a copy of “Behind Le Mans – The Film in Photographs” to each member attending the RRDC dinner in Daytona on Jan. 27.

* Lyn St. James’ book, “An Incredible Journey” is still available. “More than an autobiography by a legendary race car driver. St. James captures the essence of racing in both an educational and inspirational way” – Sandy Cotterman, Racemaker Press.

* Porsche factory driver Patrick Long will return to compete in Pirelli World Challenge for the EFFORT Racing Porsche team in 2016. Long last competed in the series in 2011 and won the GT Drivers’ Championship. Long has competed in every 24 Hours of LeMans since 2004, the last three years with Dempsey-Proton Racing. He placed third in the 2015 FIA World Endurance Champioship.

* Gordon MacKenzie is turning 90. Thanks to the Barclay Boys for the vintage image of our friend. If you’re in the Northeast, you can help him celebrate at an Open House at 3 p.m. on Feb. 21 at the Amenia Steakhouse, 4950 Rte. 44, Amenia, N.Y. For more info and to RSVP, please contact Terry Dunne at 860-248-1799 or email at tr7terry@hotmail.com.