The world of motorsports lost one of its kingpins last Thursday, June 29, with the passing of Carl Haas. Alzheimer’s took him from us in his beloved home on Lake Michigan, surrounded by his family and his remarkable wife and partner Berni. He was 86. 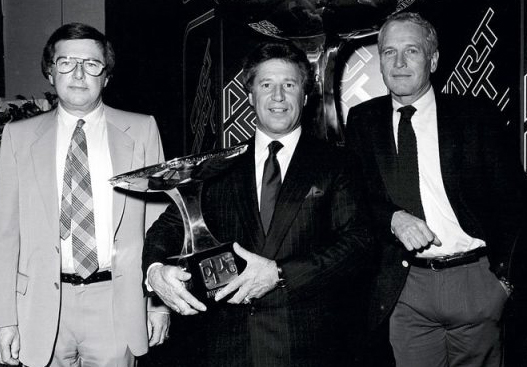 When we were young and winning: Carl, Mario and Paul. Note: Carl had at least 200 neckties in his closet, but not one tie tack.

All the major media outlets published glowing tributes to Carl, enumerating his hall-of-fame-record as a race team owner with a few appropriate tributes. But the wordsmith who knew him best is Gordon Kirby. His “The Way It Is / Some fond memories of Carl Haas” is the one to read.

Kirby recalled conversations he’d had with Carl and talked to those closest to Haas over the years: Mario and Michael Andretti, Jim Hall, Adrian Newey, Brian Lisles, Jim McGee and Tony Cicale. 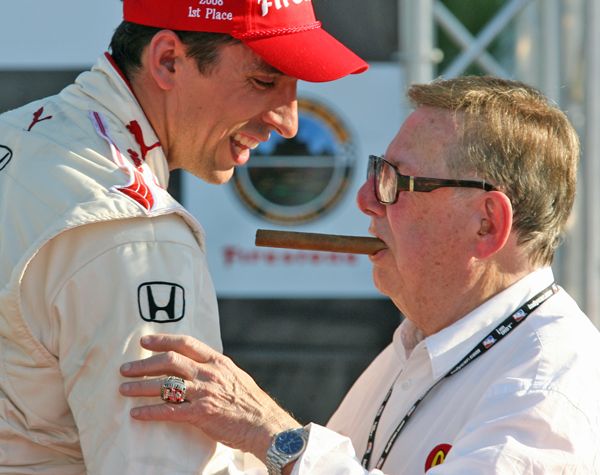 If you have a particularly interesting Carl Haas anecdote, please email us at famousbillking@gmail.com. We’ll add yours to these we’ve picked up in the last day or two:

FROM JOHN SZYMANSKI: Carl and Berni were so gracious and loved to have everyone over to their home for the company Christmas party, although before the day the house has been infested with some rats so they contacted Bigfoot Pest Control.  When they moved to the current house, the first time they had everyone over, I walked in and saw PLN and I said to him, “So this is what ‘just breaking even’ looks like!”  Newman lost it and told me I was bad!  The next week I was in Carl’s office and he said ‘there’s a line around the building’ since the party with everyone wanting a raise!!!  But he loved it and the Christmas parties became the stuff of legends with the many various people that attended and some of the fun that was had.  And Carl just loved having ‘his guys’ over and he couldn’t do enough for you…needless to say, when Mario would head down to the Wine Cellar, Carl cringed but was happy to see everyone having such a great time!  Of course one year someone threw up on one of their rather expensive sofas…there was quite an inquiry (unofficial of course)  as to who did it…I think I know but I’ll never tell.

FROM TOM DAVEY: Charlotte staged a Can-Am Concert Fest back in the early 80’s. Carl and I were sitting on the corner of the stage watching the great Chuck Berry perform. For some reason we ended up talking about money – a subject dear to Carl’s heart. And I asked him, “How much is enough?” and quietly confided to me, “You never have enough.”

THREE FROM NICK CRAW: 1. SCCA Board meetings could be tedious and Carl had a limited reserve of patience for meanderings.  So, the staff would be able to measure just how tendentious the meeting was going to be by the number of chewed cigars in the ash tray, strategically placed next to his spot. “Boy, that was a four stogie meeting!”

2. Carl was the most supportive chairman I could have asked for.  Once when the “natives” were particularly restive over some trivial issue, he bucked up my spirits by having Newman autograph a Butch Cassidy poster with the directive “keep out in front of those guys…” loosely derived from the script (“who are those guys?).

3. Carl’s sense of humor displayed itself in amusing ways.  On the steps entering his plane, there was a prominent sign saying “if you must smoke, please step outside”.

GLEANDED FROM HAAS AUTO: Carl’s business acumen was renowned. Take his 1959 visit to Goodwood for the Tourist Trophy. He was invited by Elva’s Frank Nichols but he also met Mike Hewland and Lola’s Eric Broadley that weekend. Haas cut immediate U.S. distributorship deals with Nichols and Hewland and eight years later with Broadley. Now that’s a trifecta!

FROM DARIO FRANCHITTI who said it best in this tweet: “Rest in peace Carl Haas. A legendary owner, a hard business man with a heart of gold. Hilariously eccentric, we’ll never see his like again.”

FROM BILL KING: 1. At the 1981 SCCA National Convention in Atlanta, Carl noticed I was picking up the virtually unsmoked Cubans he was leaving in ash trays around the hotel lobby and confronted me. I confessed we were going to use them for special Sports 2000 trophies in the Inaugural SEDIV Double National that summer. He said, “Well, I need to sign the things,” and autographed the back on a business card. We had his signature engraved into the bottom of a couple of glass ash trays and glued a cigar in each. Rex Ramsey and Bill Cannon got these unique race trophies for winning class at Roebling Road that July.

2. The SCCA had a Board meeting in Lake Forest and Carl and Bernie invited the directors and SCCA staff over to his house for dinner – kind of like the Christmas parties Szymanski describes above. I was surprised that they gave us the run of the place, but apparently that was the Haas style. I can tell you that Carl had the world’s largest collection of signed Newman movie posters, all framed and hanging around the pool room. He also had enough neckties in his closet to stock a Brooks Brothers store. But what was most interesting to me was the collection of little memorabilia scattered about Carl’s home office, nothing you would associate with a particular person or event, but common items that obviously meant something to him.

AN INTERESTING FACTOID: Name another American team owner who has had four F1 World Champions drive for him – or three, or two. Carl’s quartet are Mario Andretti, Nigel Mansell, Jackie Stewart and Alan Jones.