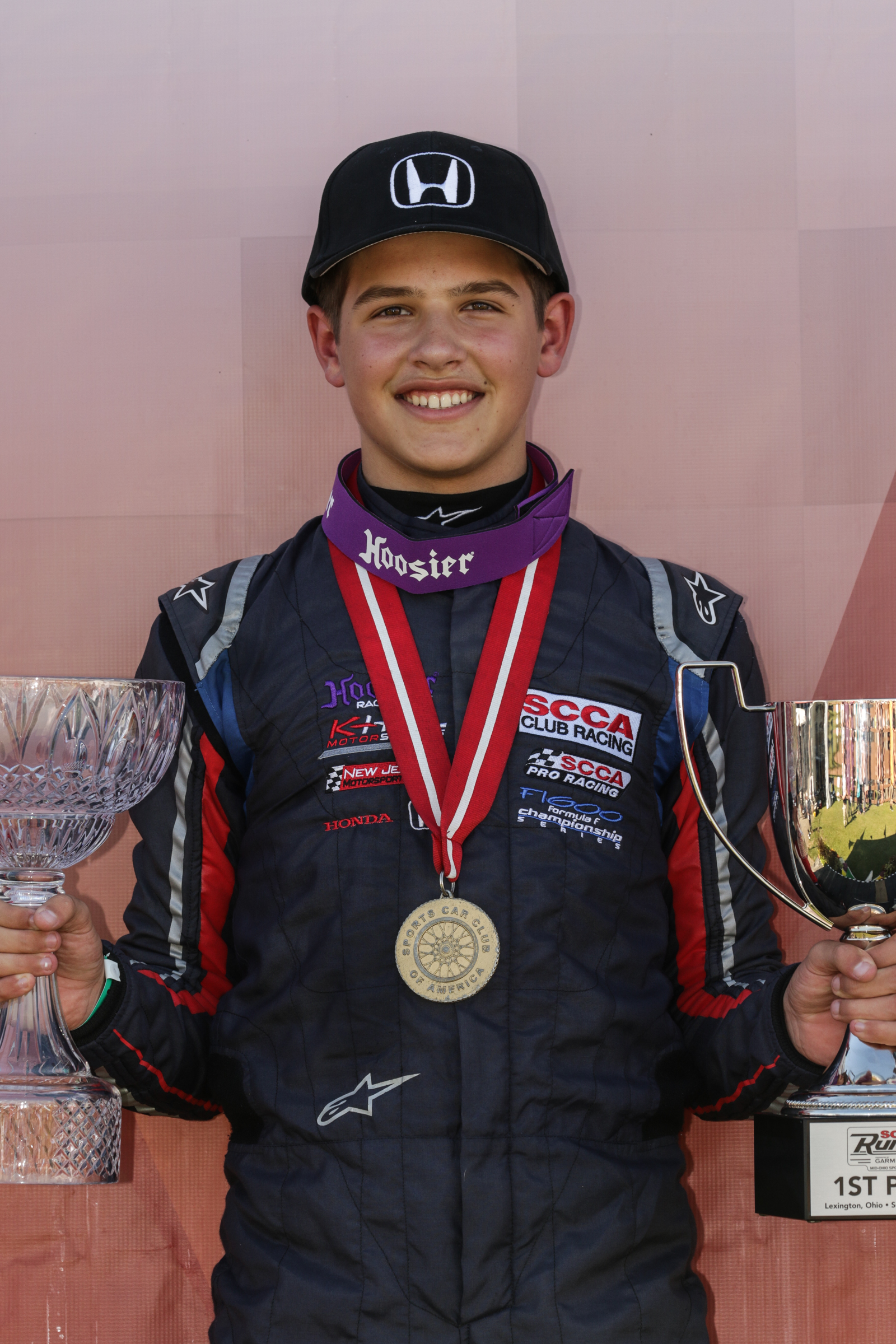 Neil Verhagen, a 15-year-old high school student from Mooresville, N.C., was named the 46th recipient of the RRDC Mark Donohue Award. This unique award is presented annually by the Road Racing Drivers Club for outstanding performance, competitiveness and sportsmanship during the SCCA National Championship Runoffs. It is voted on by RRDC members attending the Runoffs and/or viewing them live on the Internet.

Verhagen became the youngest SCCA National Champion in history, winning the Formula F class during the SCCA Runoffs presented by Garmin VIRB at the 2.258-mile Mid-Ohio Sports Car Course, Sept. 19-25, 2016. Before this win, IndyCar racer Graham Rahal, a full year older than Verhagen, was the youngest when he captured the Formula Atlantic National Championship at Mid-Ohio in 2005.

The award is named for RRDC member and former president Mark Donohue, who won his first National Championship in the SCCA E Production class in 1961, and then went on to become one of the U.S.A.’s greatest racing drivers. He won the Indy 500, the Can-Am Championship, three Trans-Am Championships, and the IROC Championship.

Verhagen will be officially presented the award at the annual RRDC members’ dinner at the Rolex 24 At Daytona on January 25th.

Driving in his first Runoffs in the No. 3 K-Hill Motorsports/Hoosier Mygale SJ11/Honda, Verhagen started from pole position and built a 15-second lead before a full-course caution brought the field back on his tail. He quickly moved ahead after the restart and took the checkered flag with a 5.51-second margin of victory.

“I definitely knew that it was going to be hard, but I got a little bit lucky at some points in the race, because I built an early lead, enough for the draft not to affect me any more,” he said. “And then from there they started battling behind me. I got a decent lead, but the full-course caution scared me quite a bit because it bunched the pack back together. There was a lapped car that kind of interfered in the race and blocked the No. 2 position after the restart. I got lucky on that too.

“We had quite a good pace the whole weekend after qualifying on pole,” added Verhagen. “I knew I had the pace to win it at least; it was just a matter of how the draft played out.”

As for earning the RRDC Mark Donohue Award, “I knew about the RRDC Donohue Award, but I had no idea I was even in contention to receive it until I got the phone call from Bobby Rahal. I am extremely honored and very happy to receive this award,” said Verhagen, who won the 2016 F1600 Series championship and was named the only American on the FIA’s 20 Under 20 list.

“It’s obviously not easy to win the Runoffs or the F1600 Series championship. I got done what I came to do and it was a very good year for me,” said the driver who’s won two karting championships since starting his racing career in 2010.

Verhagen credits his family for allowing him to pursue his dream. “My family has no relation to racing at all, which makes it quite difficult because at the same time that I’m going through it for the first time, it’s also their first time,” he said. “My dad had a group of friends at work who had BMWs and would take them to track days but not to race. I thought that was kind of cool and I wanted to try it, and then he got me into a go-kart eight-nine years ago, and here we are today.

“My family has been absolutely amazing. Even my brother races, and that makes it even more difficult to try to support two kids. And it’s because of their support that I’m here.”

His racing heroes include Will Power, who spurred Verhagen’s interest in open-wheel racing after meeting him at an IndyCar race, Michael Schumacher, Mark Donohue, and Dale Earnhardt Sr., with whom he shares an unfortunate connection. Verhagen was born on Feb. 18, 2001, the same day that Earnhardt lost his life at the Daytona 500. 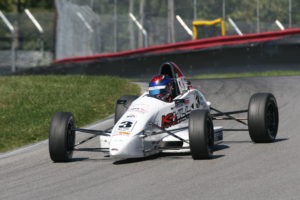 Even though he lives in the heart of NASCAR country, he has a clear goal. “I’m determined to get a professional ride in either IndyCar or F1,” he said.

RRDC president Bobby Rahal, a Runoffs champion (’74 B Sports Racing and ’75 F Atlantic) long before he won the 1986 Indianapolis 500, emphasized the RRDC Mark Donohue Award is “about personal spirit and performance behind the wheel. Those qualities are more important for this award than winning the race.

“The RRDC honors Neil not only for his outstanding drive to win, but for his natural ability and skill at such a young age to safely win a championship against other outstanding drivers and cars in the field.”

Every year, the RRDC Mark Donohue trophy is an engraved glass top mounted on a special, racing-experienced wheel, provided by an RRDC member. This year’s wheel was donated by Roger Penske and Team Penske, celebrating its 50th year in the sport. It came from the No. 22 Shell-Pennzoil Ford driven by Joey Logano at the Nov. 13 Phoenix NASCAR race, where he shredded the tire performing a victory burnout. That race represented a key victory in the Chase as it allowed the team to advance to the championship at Homestead the next week. 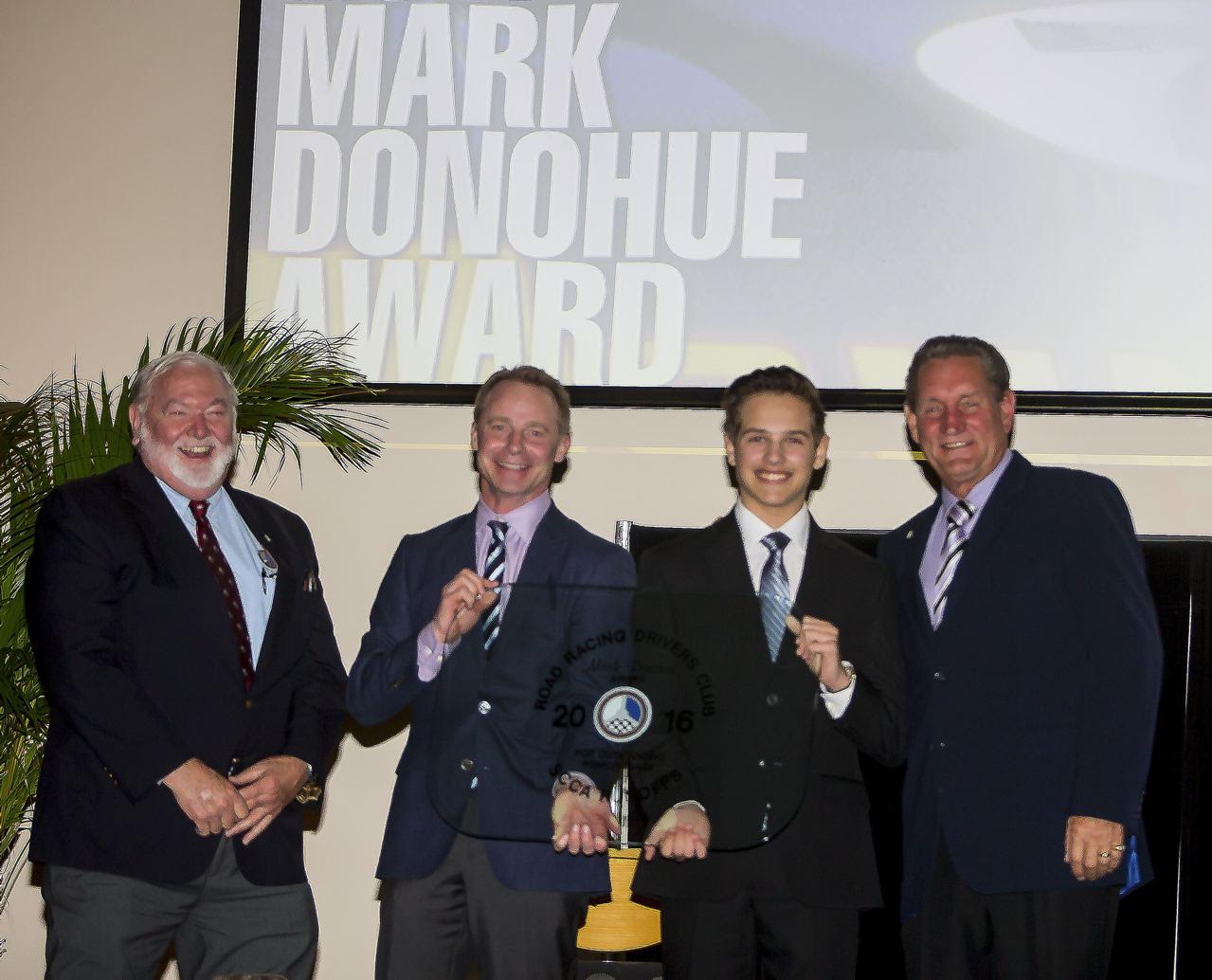