DAYTONA BEACH, Fla. (January 28, 2016) – Michael Shank Racing owner Mike Shank, of Etna, Ohio, has been named the recipient of the 2016 Rolex Bob Snodgrass Award of Excellence. The announcement was made during the traditional prelude to the Rolex 24 At Daytona – the Grand Marshal Dinner – which was held at the Daytona 500 Club on Friday, Jan. 27. From a short list of three successful team owners who competed in the 2016 IMSA WeatherTech SportsCar Championship, a panel of motorsports professionals selected Shank.

“It’s always a pleasure when the Rolex 24 comes around because I get an opportunity to continue a tradition that means a lot to me,” said Harris Snodgrass, Bob’s son, in introducing Shank as the winner. “First and foremost, I would like to thank Gorsline Company, the premier insurer of high-risk professionals, for continuously helping make this award possible. And, of course, Rolex, for supporting this award and providing the commemorative watch.

“The fact that my father’s impact on people is still relevant 10 years after his death, and his legacy is staying alive, is more than I could ask for for my best friend and mentor. 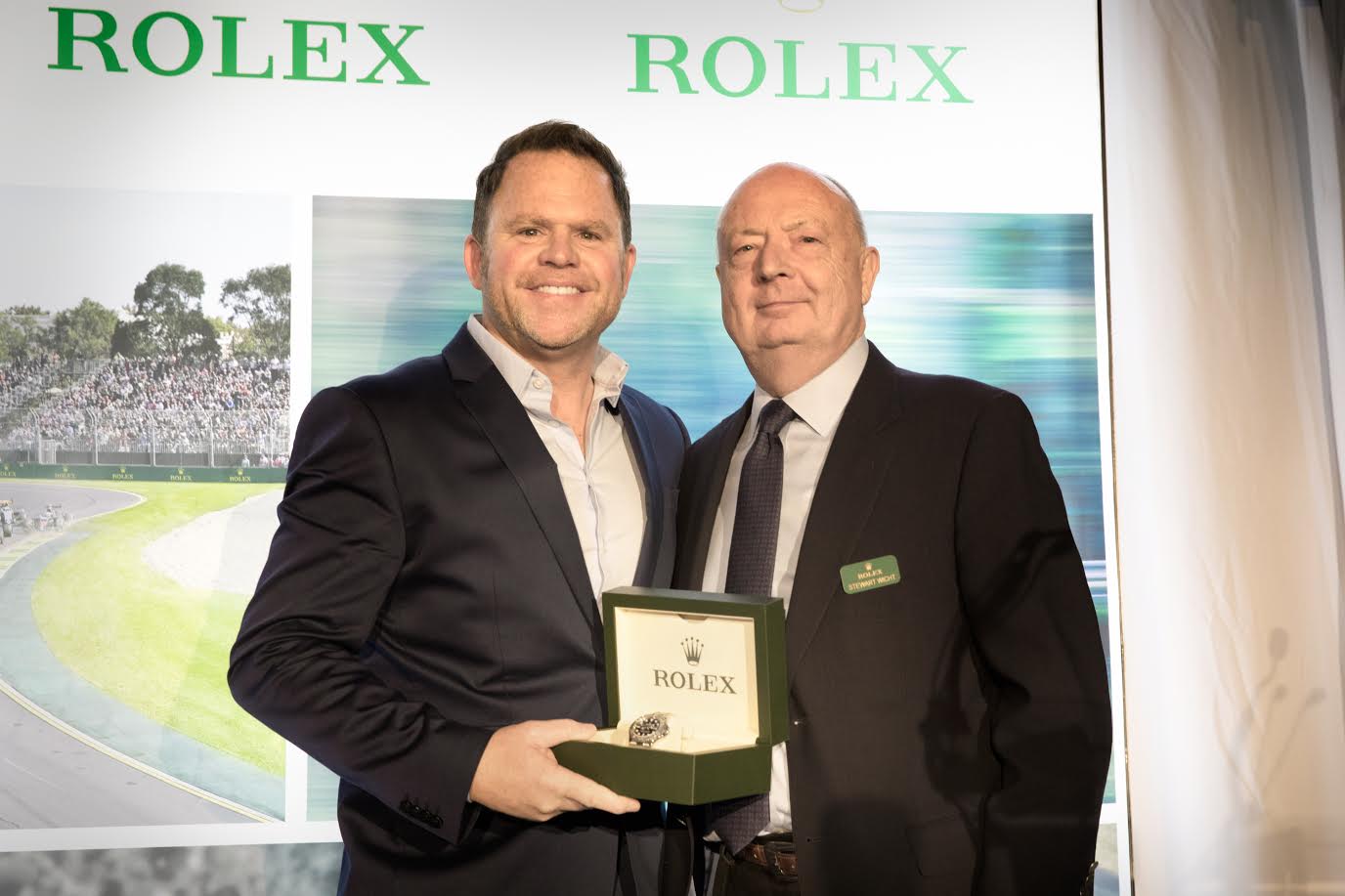 “The Rolex Bob Snodgrass Award of Excellence acknowledges a team owner or manager who has demonstrated the qualities of honesty, integrity, passion for the sport of automobile racing and an infinite love of cars altogether. These are all characteristics that made my father who he was, as most of you might know, so the basis for this award is very fitting.”

The other candidates for the 2016 award were RRDC member Jonathan Bennett and Giuseppe Risi.

Mike Shank began racing professionally in 1989, winning the 1996 Toyota Atlantic C2 Championship before moving into the Indy Racing League. He earned 30-plus national victories in a variety of series before retiring as a driver, and was named the Formula Atlantic Championship Car Owner of the Year two times.

In 2004 he moved his team into the IMSA series, winning the 2012 Rolex 24 overall in Daytona Prototype. Shank was inducted into the RRDC in 2012. In 2016 the team made its 250th Prototype start at Road Atlanta, starting on the pole and winning the event. It marked longtime team driver John Pew’s final race with the team before retiring from IMSA racing.

Other highlights of the 2016 season include a ninth-place finish in their first LeMans start, after leading for two laps. The team and driver Ozz Negri finished the season fourth in the standings, while Pew was eighth.

“It’s amazing to me every year to be granted the opportunity to present an award in Bob Snodgrass’s name, my dad,” Snodgrass continued. “It makes me happy becuase he would be so honored to know that the ethics he lived by were worthy of such an honor, especially with Rolex involved, Gorsline Company, and Daytona international Speedway, which is like a second home, and all the people involved.

“His word was his bond, he always did the right thing, and he was passionate about motorsports. I believe our winners carry the same intrinsic values through life.”

Shank was presented with a specially engraved Stainless Steel and Platinum Rolex Yacht-Master by Stewart Wicht, President and CEO of Rolex Watch USA, “a watch my father would have picked personally for this award as he loved giving the exact timepiece to deserving employees,” added Snodgrass.

“Michael, wear this watch in good health. Congratulations,” said Wicht.  “I think about Bob a little bit because I met him in 2005,” said Shank. “It was funny. Bob, toward the end of when I knew him, had a big pedestal he sat on. I mean, it was like 20 feet in the air. I thought this was the coolest thing, I need to get one of these. So one day in 2005 our car was running really well, one of his was not. I went to him and I’m looking up at him (on the pedestal) and saying, Bob, let me through, we need to get through, give me two seconds. And he’s like, Who the hell are you?

“The other thing I want to say and this is what’s important,” he added. “I was there in 2007 at VIR where they honored Bob and his family. I was in the pit lane in my pit box getting ready before the race, and they did a lap of honor to Bob. They did it with the two Brumos cars. When i looked out there I could see the family. Hurley Haywood was out there, David Donohue and Darren Law were out there and it struck me about the respect and the love [that was shown]. It actually hit me right there, and i thought if some day i could have that respect I’d actually have done something, and that’s not b.s. I thank the Snodgrasses very much.”

The Rolex Bob Snodgrass Award of Excellence was created to recognize the team owner or team manager who has demonstrated the qualities of integrity, passion for the sport and the love of cars for which Bob Snodgrass was known during his life and career. The award – supported by Gorsline Company, the premier insurer of high-risk professionals – has been presented to Bob Stallings (2010), Joe Sahlen (2011), Peter Baron (2012), John Stevenson (2013), Alex Job (2014), and Chip Ganassi (2015). Both Snodgrass and John Gorline are on the RRDC membership roles.