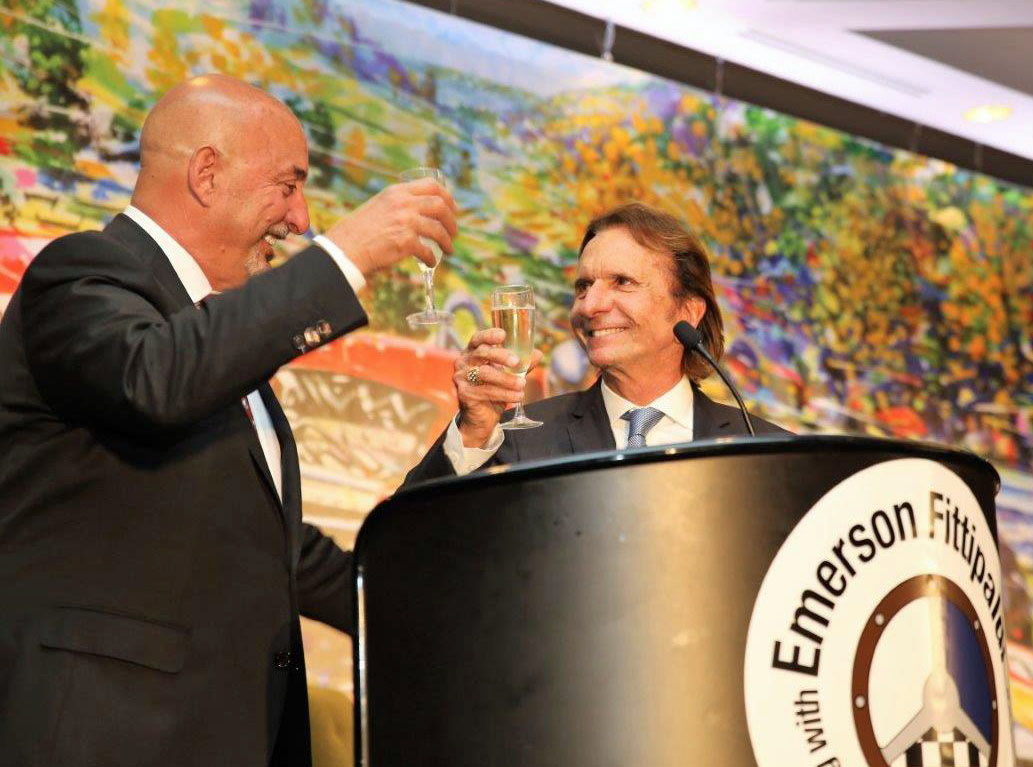 Formula 1 and Indy 500 champion was honored by the Road Racing Drivers Club, prior to the running of the 43rd Toyota Grand Prix of Long Beach.

Representatives from the Verizon IndyCar Series, the Indianapolis 500 and the IMSA WeatherTech Sports Car Championship were in attendance.

A touching video written and narrated by Sam Posey chronicling Fittipaldi’s extraordinary career was shown, as well as a special video tribute to Fittipaldi from three-time F1 World Champion Sir Jackie Stewart. RRDC President Bobby Rahal then interviewed Fittipaldi on his legendary achievements in the style of “Late Night with David Letterman” – apologies for the poor audio. 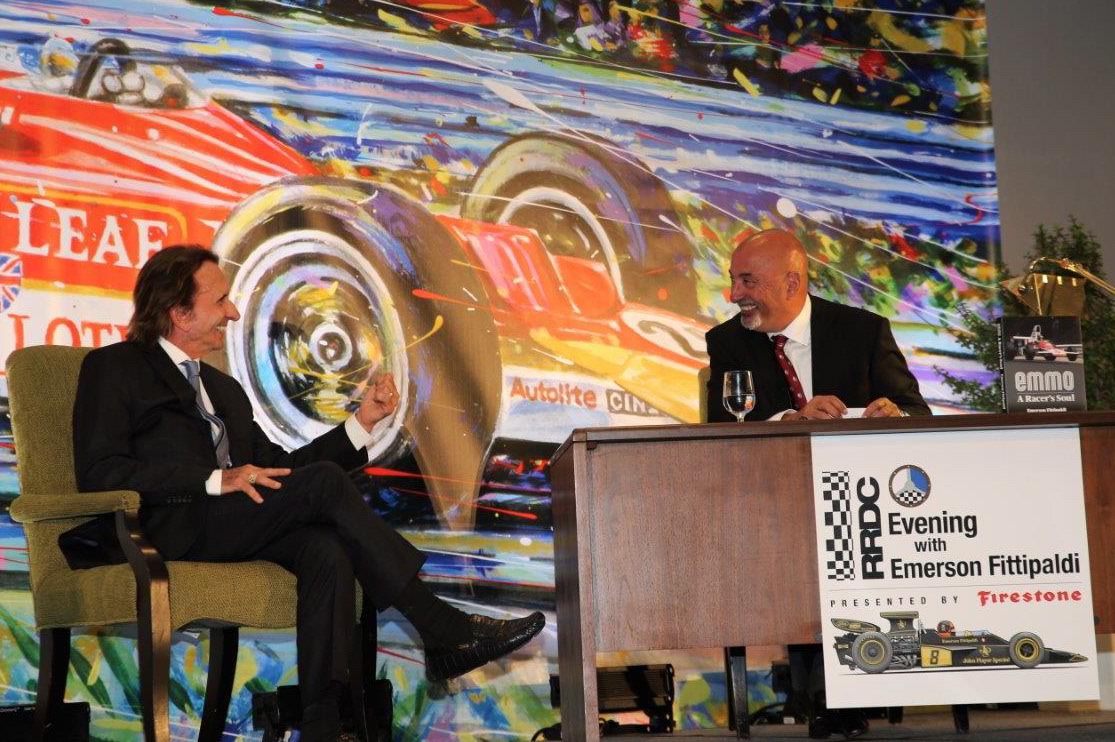 “Emmo was a hero of mine,” said Rahal. “I started racing in 1973 and Emerson won his first World Championship in 1972. Believe it or not, I had long hair in 1973, but for the life of me I could not grow mutton-chop sideburns like Emerson.

“I have to tell you, when I started racing I never imagined I’d ever compete in the same place, at the same time, the same day as Emerson Fittipaldi. I had that privilege later on.

“To me, Emerson epitomizes class, he epitomizes sportsmanship, and he really epitomizes what a real true professional race-car driver is all about. It’s a thrill for me personally to honor him tonight, and I believe everyone in this room feels the same.”

Fittipaldi responded, “It is fantastic to be here with all these great champions. I’m very happy to receive this honor at Long Beach that has so much history. I drove here in F1, I drove the Indy Car and you see the essence of motor racing in this room. It’s a historic day for me; it will always be a very special day in my life.”

A.J. Foyt, who was reunited on stage earlier with Dan Gurney to be recognized by Ford Performance for their 1967 Le Mans win for Ford, was surprised with the Spirit of Ford Award. It was presented to him by Edsel B. Ford II, great grandson of company founder Henry Ford and a member of the company’s board of directors. 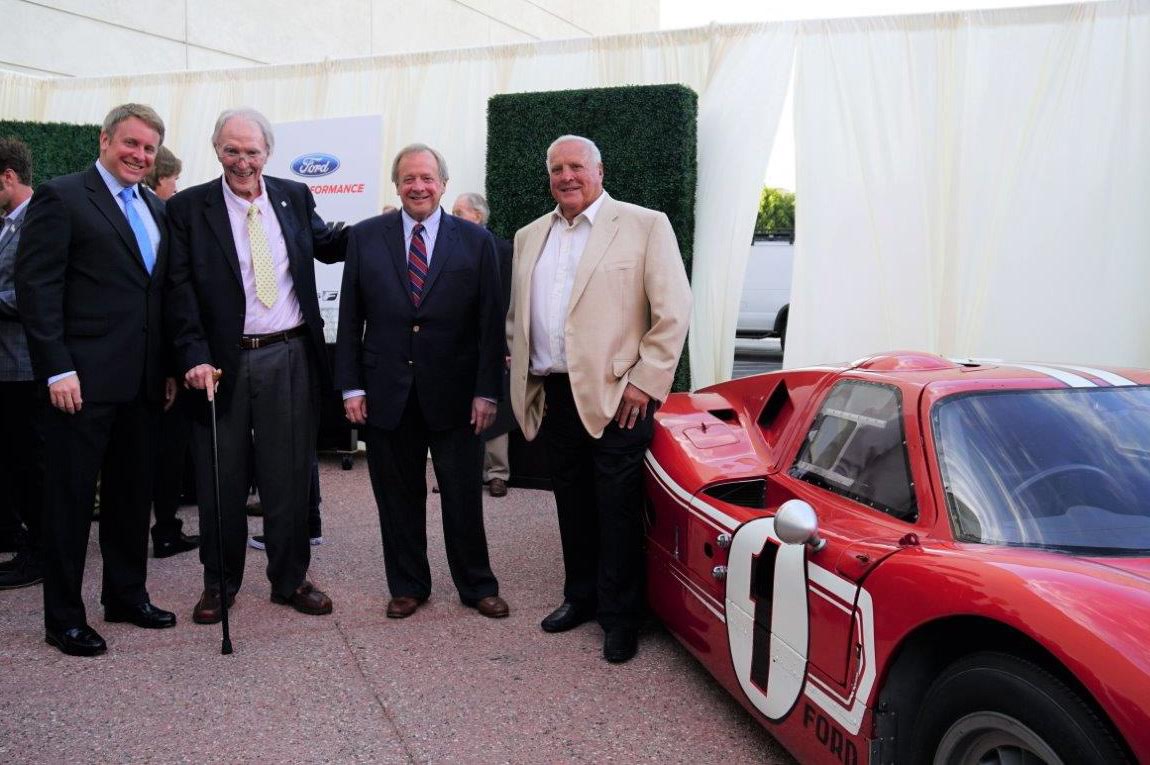 “A.J. was one of my heroes in racing when I first followed the sport,” said Ford. His passion for driving and his commitment to the sport since his retirement have made him more than worthy for all the halls of fame he is part of.”

Harley Cluxton, on behalf of the RRDC and Club des Pilotes, based in Le Mans, also presented a special award to Gurney and Foyt, etched with the words “for the 50th anniversary of your epic Victory at the 1967 24 Heures du Mans.”

Featured on the patio during the cocktail reception sponsored by American Honda were Fittipaldi’s 1974 F1 championsip-winning McLaren M23, his 1993 Indy 500-winning Penske PC22, plus the 1967 Le Mans-winning Ford GT Mark IV, which was entered by Carroll Shelby under the Shelby American Inc. banner.

The first limited edition giclee print by acclaimed artist Randy Owens depicting Fittipaldi’s first F1 race win at Watkins Glen, N.Y., in just his fourth start and less than 18 months after making his European debut in Formula Ford, was presented to Fittipaldi by Owens. Another print of the painting, signed by champion drivers and other racing legends attending the dinner, along with a 25-foot-long backdrop of the painting, were included in a silent auction.

The dinner’s proceeds will help support the RRDC’s young driver initiatives, including its groundbreaking SAFEisFAST.com presented by Honda program, and the Team USA Scholarship, which the RRDC has backed since 1997. Team USA is celebrating its 26th anniversary this year.