YOUNG GUNS ON A TEAR; EMMO SET FOR AMELIA ISLAND

Our two RRDC/Team USA/SiF young guns have really been delivering the goods this season and were totally dominant this past weekend. 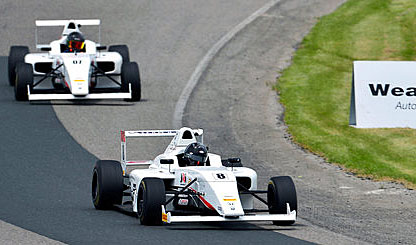 Oliver Askew won the Mazda Iowa 60 race at Iowa Speedway from the pole – his first USFF2000 oval race and first oval win. With six victories this season, Askew is leading in the Cooper Tires USF2000 Championship Powered by Mazda by 32 points with five 2017 races left. [Front page image by USFF2000 – Askew leads from the start.]

Both Askew and Kirkwood drive for Cape Motorsports.

Emerson Fittipaldi, double Formula 1 World Champion and two-time Indy 500 winner, will be the honoree for the 23rd annual Amelia Island Concours d’Elegance on March 9-11, 2018 at the Ritz-Carlton, Amelia Island.

Emmo is on a roll this year, having been the man of the hour at the RRDC Evening with Emerson Fittipaldi gala in April at Long Beach.