Aaron Jeansonne, 19, from Sulphur, La., and Jonathan Kotyk, 23, from Atlantic Beach, Fla., have been in England for more than 10 days leading up to their overseas car racing debuts as the 2017 representatives of Team USA Scholarship. The pair are the latest in a long line of talented young American race car drivers to carry the patriotic red-white-and-blue colors in what has become acknowledged as a pair of the world’s most prestigious junior formula car events – The Formula Ford Festival at Brands Hatch and the Walter Hayes Trophy at Silverstone – especially significant in this 50th Anniversary year of Formula Ford.

[Click on the links for their stories in their own words]

Jeansonne and Kotyk first buckled into Cliff Dempsey Racing’s Ray Formula Ford cars in a shakedown a week ago Tuesday at the Bruntingthorpe Proving Ground not far from the team’s base in Corby, Northamptonshire.

Then it was on to Donington Park in Leicestershire and Oulton Park in Cheshire for test sessions, followed by three full days of testing this week at the 1.2-mile Brands Hatch Indy Circuit in Kent for Aaron and Jonathan.

The high-quality field of 76 cars was split into three groups, each of which was granted a 20-minute qualifying session during the morning and a 15-lap race later in the day to determine the starting positions for a pair of Semi-Final races set for Sunday morning. 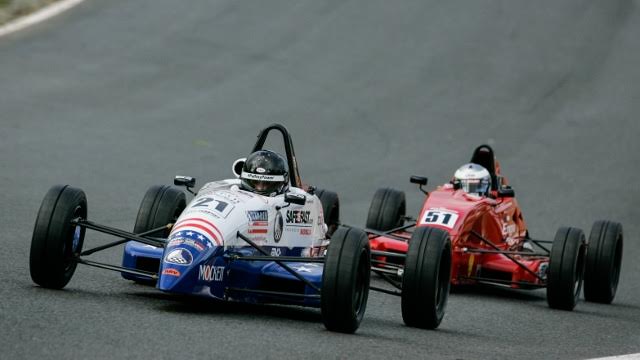 Kotyk, from Atlantic Beach, Fla., encountered a dry track during qualifying for the second of three Heat races and lined up 10th on the starting grid. He made up a couple of positions during the early stages, hunting for grip on a damp and gradually drying circuit, then lost one of those places before regaining it again on the final lap after Michael Eastwell spun out of the leading group.

“It was definitely pretty challenging, especially with the weather,” said Kotyk. “There was sunshine in the morning and then, as soon as qualifying came, a little rain. When we went out for qualifying we had the wet setup on the car and we were planning on coming in and putting a dry setup on but unfortunately when I did come in, it rained, so I missed getting a (good) lap in. That cost us a little bit so for the race I just wanted to make sure we brought the car home and tried to push and get used to the tires, that was the biggest thing for me today.”

Conditions were almost diametrically opposed for Jeansonne. The track was wet for the entirety of his qualifying session for Heat Three, and his task was made all the more difficult by a pair of red-flag interruptions. Undaunted, Jeansonne, 19, from Sulphur, La., stepped up during the final couple of minutes, despite the onset of more rain, posting the fourth fastest time among the 25 competitors and ensuring himself a position on row two ahead of many vastly more experienced campaigners. 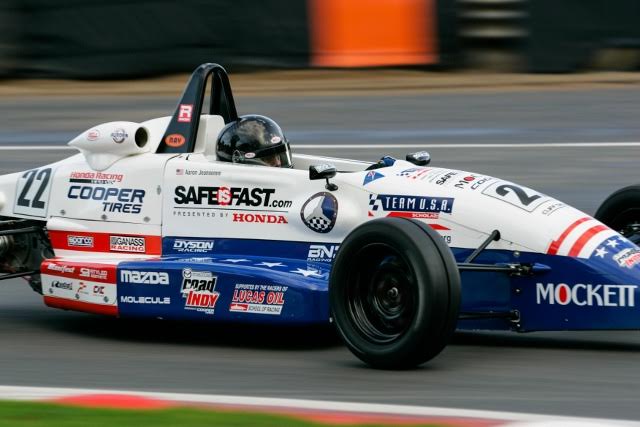 Jeansonne lost a couple of positions at the standing start before settling into an entertaining scrap with Joshua Smith, who recently won both final rounds of the BRSCC Avon Tires British Formula Ford 1600 Championship, and regular Scottish FF1600 front-runner Sebastian Melrose. He was forced to cede a place to Melrose after five laps but seemed set for at least a sixth-place finish until being forced off the road at Graham Hill Bend while passing a lapped car. He recovered to finish 11th.

“I‘d say it was a pretty up and down day,” summarized Jeansonne. “The qualifying went really well and I like the wet a lot but unfortunately it dried out for the race and I figured I’d take as much of the track as I could get each lap. Then I had an unfortunate incident with a lapped car that threw me back a few positions and I just held onto the highest spot that I could and finished there.

“It was about as competitive as I pictured it,” he continued. “It was very tough, definitely, and there are a lot of guys who have been running here for a long time but it’s nice to see all the competition and try to stack up against them. Qualifying was a lot of fun. That’s the thing about qualifying. You’re forced to come up clutch sometimes and you just have to do it. I felt really happy about it; it was really pleasing.”

Kotyk and Jeansonne are slated to line up 12th and 16th, respectively, for Semi Final 1 at 11:30 am Sunday morning (October 22) local time. The Formula Ford Festival Final will start at 5:00 pm, although the schedule is subject to change.