TEAM USA’S KOTYK LIGHTS IT UP AT SILVERSTONE

The buildup for Team USA Scholarship to the prestigious Walter Hayes Trophy at Silverstone Circuit was a basket of delights for the young adventurers. After some fruitful testing at Donington Park, Jonathan Kotyk and Aaron Jeansonne grabbed a train to downtown London for a couple of days sightseeing before a much anticipated visit to the McLaren Technical Centre in Woking.

Then it was on to Silverstone with a stop at Wirth Research and a few laps on their race simulator. Three days of testing in their Cliff Dempsey Racing Ray GR15 Formula Ford racecars had the pair set to take a shot at the Walter Hayes Trophy, won previously by Team USA drivers Conor Daly (2008), Connor De Phillippi (2009) and Tristan Nunez (2012). And they would give it a good go. Here is Team USA Scholarship president Jeremy Shaw’s account of raceday:

Chilly but bright and sunny conditions greeted the competitors for this morning’s curtain-raiser, a 10-lap Progression Race for which Jeansonne started 22nd following his incident yesterday. The youngster rose to seventh on the second lap but was unable to avoid a collision in front of him which sent his car skywardand, then into a spin, it was very evident that he would need to take his car for a collision repair. Despite rejoining in a seemingly hopeless situation, Jeansonne posted comfortably the fastest lap on a still-damp circuit before taking the checkered flag in seventh – tantalizingly just 0.425s away from a transfer position. 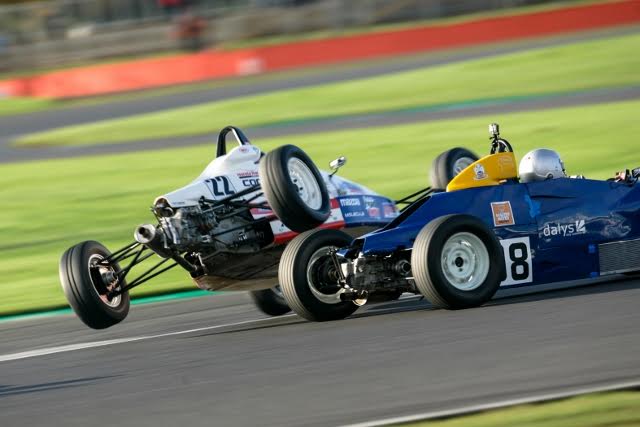 The focus then shifted to Kotyk, who lined up second on the grid for the first of two Semi Final rounds. Following a race-stopping accident which eliminated pre-event favorite and defending winner Niall Murray, Kotyk fought some handling difficulties during the 12-lap race before finishing strongly in fifth, less than a second behind race-winning Englishman Josh Fisher.

“We were missing a little in the car in the Semi,” recounted Kotyk. “It cost us some but a row five starting position for the Grand Final is good. I’m glad to keep the car up front and ready to fight hard.”

He certainly did! Kotyk duly started 10th in the Grand Final which saw well over 20 cars battling in nose-to-tail or side-by-side formation for the majority of the distance. The race eventually distilled into a two-car battle between a pair of local veterans as Michael Moyers finally claimed his first Walter Hayes victory by just 0.256s over Fisher. Fellow Englishman James Raven, driving another Cliff Dempsey Racing Ray in his first event of the season, held off Irishman Kevin O’Hara for the final podium slot, while Kotyk, in sixth, finished directly behind Chris Middlehurst and narrowly ahead of fellow British FF1600 veterans Luke Cooper and Matt Round-Garrido. 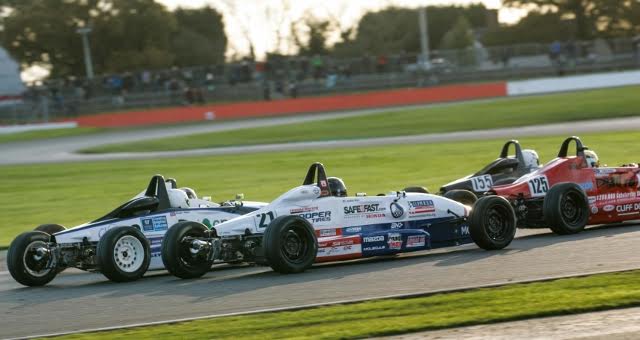 Kotyk mixing up with the lead group for the Walter Hayes Trophy. [Jack Mitchell image]

“What a final race!” exclaimed Kotyk. “There was non-stop action going into each corner. Starting 10th I knew it would be a tough race so I needed to push every lap. I had a good start off the line and from there worked my way forward. Everyone was so even up front it was a battle to the finish. It feels good to bring home a sixth-place finish against the talented field. Great result today for Cliff Dempsey Racing to bring home two cars in the top six. Any of the top 15 could have won. This has been an amazing experience and I have learned so much. I am very grateful for the opportunity.”

Jeansonne, too, remained upbeat despite his disappointing day.

“There are definitely many positives to take away from this trip and the weekend,” he said. “I know I had the pace to compete but just had a rough break here. The Progression Race was very fun though it was cool and new for me to zip through the field. Unfortunately, getting caught up an the incident ended my weekend but the whole experience has been great and I really appreciate everything that has been done by so many people to make it possible for me and Jonathan to compete over here.”

George Frey, a Porsche pilot extraordonaire and RRDC member from the 1960s and ‘70s, will now have a “brick” on the Village of Watkins Glen’s Walk of Fame. Frey’s son Gregg will write an article for Porsche 356 Registry after the brick is placed next year following the repaving of Hwy 14.