Clay Russell, of Spartanburg, S.C., was named the 48th recipient of the RRDC Mark Donohue Award for his winning drive at the 2018 SCCA National Championship Runoffs at Sonoma Raceway in October. This unique award is presented annually by the RRDC for outstanding performance, competitiveness and sportsmanship during the Runoffs. It is voted on by RRDC members attending the Runoffs and/or viewing them live on the Internet. 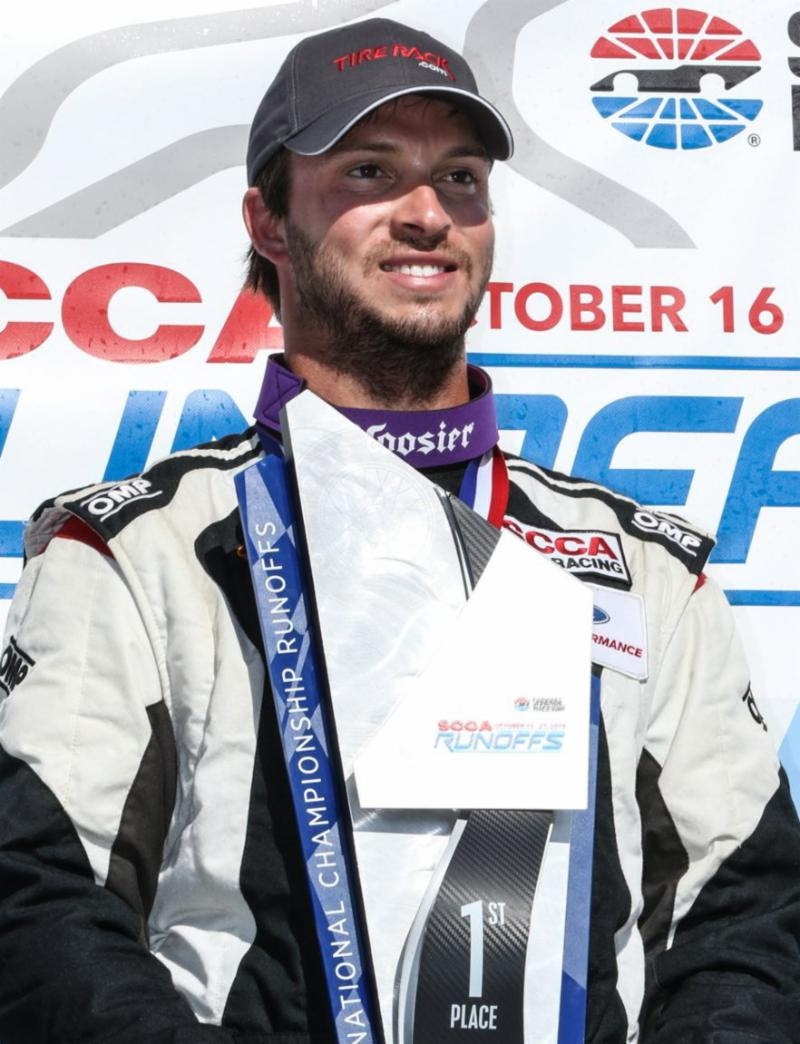 In his fourth attempt to win the Runoffs, Russell pulled off his first victory driving his No. 31 Angry Llama/SVN/Comprent Motorsports Spec Racer Ford in the 55th running of the annual event. The win, in the SpecRacer Ford Gen3 class, gave him his first Runoffs podium finish, along with a fourth- and a sixth-place finish since 2015.

Qualifying on the pole of the 36-car field, the 26-year-old Russell forged a battle with No. 2 qualifier Mike Miserendino, swapping the lead four official times at the stripe and several more unofficially during the 20-lap, caution-free race. The pair weaved through traffic to set up a final-lap showdown.

In the lead, Russell held off Miserendino in two key passing zones, positioning his car cleanly, defensively and perfectly. Miserendino had no choice but to brake late, locking up his tires and aborting the attempt to pass Russell. Russell then drove on to take the win.

Russell, who started racing a BMW at track days at Carolina Motorsports Park while in high school, admitted this was the best race of his life. “I was a big underdog going out there,” he said. “Everyone overlooked me coming out West. There are a bunch of good drivers, like Mike Miserendino and Tordy Acker, who are from California. Sonoma is one of their home tracks.

“Sonoma is a technical track. I actually prefer technical tracks, which rely more on your skill instead of drafting like at Indianapolis, VIR, or Road America, where drafting is really important. At Sonoma drafting doesn’t really count for much at all.

“So, to race head-to-head with Mike Miserendino and pull off the win is pretty exciting.

“I knew I had the skill and the temperament to win. I’m a pretty patient driver in the car.”

Russell became the only driver of the weekend to claim the SCCA Super Sweep award, which requires a Majors Conference Championship, Hoosier Super Tour point title and a Runoffs win – all in the same class. 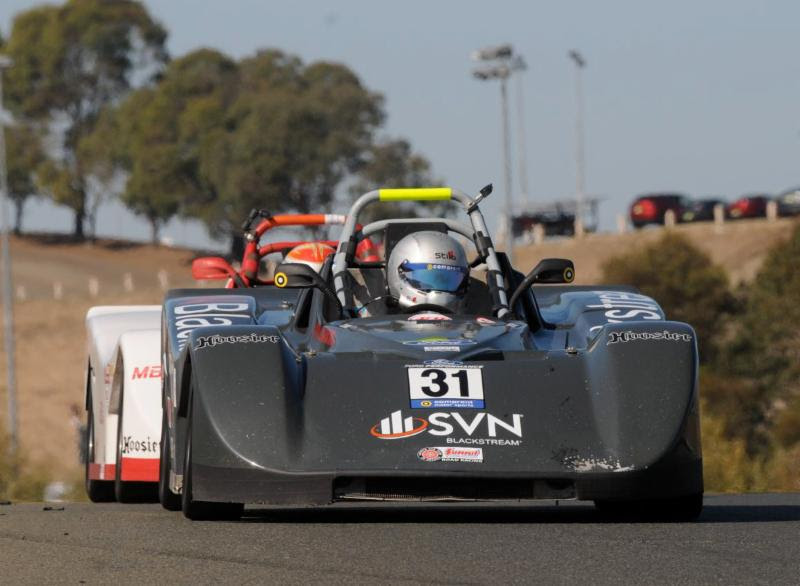 The RRDC award is named for RRDC member and former president Mark Donohue, who won his first National Championship in the SCCA E Production class in 1961, and then went on to become one of the U.S.A.’s greatest racing drivers. He won the Indy 500, the Can-Am Championship, three Trans-Am Championships, and the IROC Championship.

“It’s a big honor to get an award named after Mark Donohue,” Russell continued. “He was a great guy and a great racer. It means a lot to me to receive this award from the Road Racing Drivers Club.”

Russell was born and raised in Spartanburg, attended the university of South Carolina, and briefly worked with Porsche N.A. in Atlanta. Today he sells commercial real estate in Greenville, S.C., for SVN / Blackstream.

His future goals in his racing career include defending his Hoosier Super Tour title at VIR, testing a stock car and considering a move to IMSA competition. He’s single and shares his driving and life experiences with his dog Trout.

RRDC president Bobby Rahal, a Runoffs champion (1975 Formula B) long before he won the 1986 Indianapolis 500, emphasized the RRDC Mark Donohue Award is “about personal spirit and performance behind the wheel. Those qualities are more important for this award than winning the race,” he said. “The RRDC honors Clay not only for his outstanding drive to win, but for his passion for the sport he’s embraced and for being so cool under pressure.”

Every year, the RRDC Mark Donohue trophy is an engraved glass top mounted on a special, racing-experienced wheel, provided by an RRDC member. This year’s wheel was donated by the Rahal Letterman Lanigan IndyCar team. It’s a rear wheel produced and put into service in 2011 and used in numerous IndyCar events, including several Indy 500s by team driver Graham Rahal. It has been signed by both Graham and Bobby Rahal.

Russell will be presented the award at the annual RRDC members’ dinner this week (Jan. 23) in Daytona Beach.

Thank you to the SCCA for providing the excellent race reporting used in this story.

THE TORQUE SHOW HITS THE CYBER WORLD AT DAYTONA

The Torque Show debuts Thursday, Jan. 24, from the Rolex 24 at Daytona paddock with hosts Justin Bell and Tommy Kendall with enough tongue-in-cheek hype to satisfy an SNL audience. Get a load of this:

“Before there were lifestyle bloggers, there were real lifestyles lived by real people. Of all the lifestyles lived, none perhaps was richer than the pinnacle of professional sports car racing:  brave drivers, exotic machinery, danger, beautiful women, money and drama. This is not hyperbole. Everyone wanted to be a rock star, the rock stars wanted to be movie stars and the biggest movie stars wanted to be race car drivers;  Steve McQueen, Paul Newman and Patrick Dempsey, to name a few. Nothing compared to real heroes testing themselves against their own fears, their competitors and fate, driving real fire-breathing experimental race cars, putting real lives on the line, immersed in the sexiest, most glamorous world you could imagine. That was IMSA then and that is IMSA today as it celebrates its 50th anniversary. 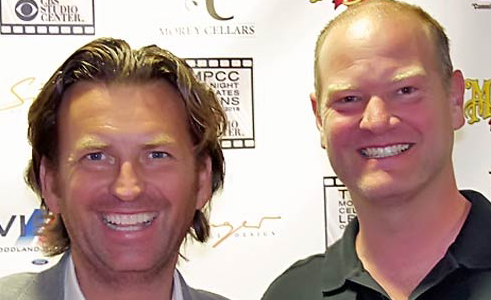 “Today, in the IMSA paddock, it is with Justin Bell and Tommy Kendall on The Torque Show set.  Nothing against lifestyle bloggers, but they capture a lifestyle in one or two dimensions and usually just a veneer that represents the lifestyle.  The Torque Show is going to bring this world in all of its three dimensional richness to fans around the world.  It is where everyone will naturally gather to hear their heroes share stories of the big wins, wild moments, heartbreaks, and some of the stuff not fit for television.  We will break down the action, take part in some good-natured ribbing, mediate some disputes, and do a little bit of celebrating too”

The Torque Show will be LIVE on MotorTrend Facebook starting
Thursday 24th January at 12pm. 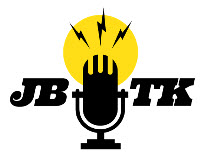 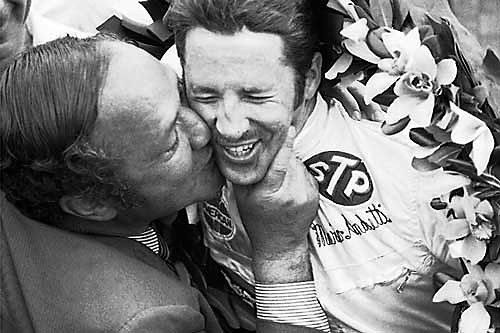 Mario Andretti won the 53rd Indianapolis 500 on May 30, 1969, driving the No. 2 STP Oil Treatment Hawk III-Ford fielded by famed team owner Andy Granatelli. The victory was one of the most noteworthy achievements of Andretti’s incomparable career, which also included a Formula One World Championship, four IndyCar championships, a Daytona 500 victory and victories in the Rolex 24 at Daytona and 12 Hours of Sebring.

“Winning the Indy 500 changed my life,” Andretti said. “It opened so many doors, creating immense opportunities. It was career-changing. If only Andy Granatelli could be here today to see that we’re still celebrating 50 years later. Because what happened in 1969 was just as important to him.”

Mario talked with Kurt Ernst of Hemmings Daily about the 1969 Indy victory plus the controversial 1981 race and what it will take to get an American back on a Formula 1 podium. 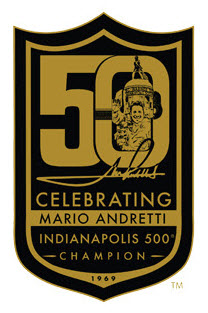 FROM RACER.COM: The Rutherfords had been married since 1963, when they met at Indianapolis Motor Speedway. Betty was serving as a nurse at the track during the month of May while Johnny was a rookie at the Speedway. The two were married a couple months later. Betty went on to play a significant role in charity work related to Indy car racing. 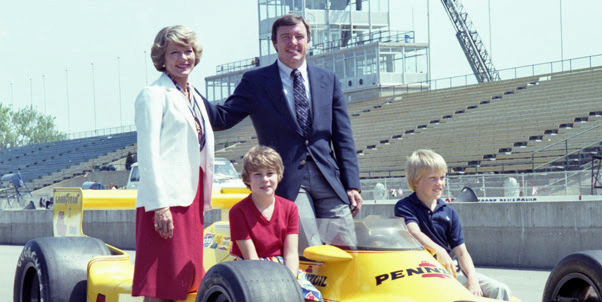 “We’re all very saddened about the passing of Betty Rutherford,” Indianapolis Motor Speedway President Doug Boles said in a statement. “From the minute she and Johnny met at the Indianapolis Motor Speedway in 1963 when he was an Indy 500 rookie and she was a student nurse in the infield medical center, Betty has been a beloved member of the racing community. Her mutual devotion for Johnny, his legendary racing career and their beautiful family was evident from the beginning and throughout their 55-year marriage, but she also worked tirelessly for decades as a driving force behind many charitable organizations and efforts in the IndyCar community, especially CARA Charities.

“Betty’s engaging smile and personality will be remembered by everyone, as she was a wonderful person who radiated class and warmth to all. We extend our deepest sympathies and heartfelt condolences to Johnny, their family and friends.” 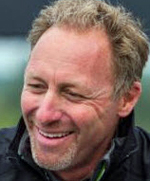 Flying Lizard Motorsports Program Manager and Team Principal Darren Law will be a featured presenter at next month’s Lone Star Region Porsche Club of America (PCA) Annual Awards and Recognition night near Houston. Open to all members of the Porsche Club of America, the February 9th Houston event will have the theme “Looking Forward. Going Forward.”

“It’s always an honor to be included in PCA events,” said Law. “Flying Lizard built our legacy with Porsche machinery, and we see the fruits of that relationship everywhere we go. I’m looking forward to speaking at the awards and sharing stories from a memorable era, as well as looking ahead to another year with Porsche as our manufacturer.”