A capacity crowd filled the Long Beach Hilton ballroom April 11 for the RRDC Evening with David Hobbs Presented by Firestone, which included auto racing dignitaries, corporate executives and champion race-car drivers. Hobbs, an accomplished driver and TV commentator, was honored by the Road Racing Drivers Club, prior to the running of the 45th Acura Grand Prix of Long Beach. 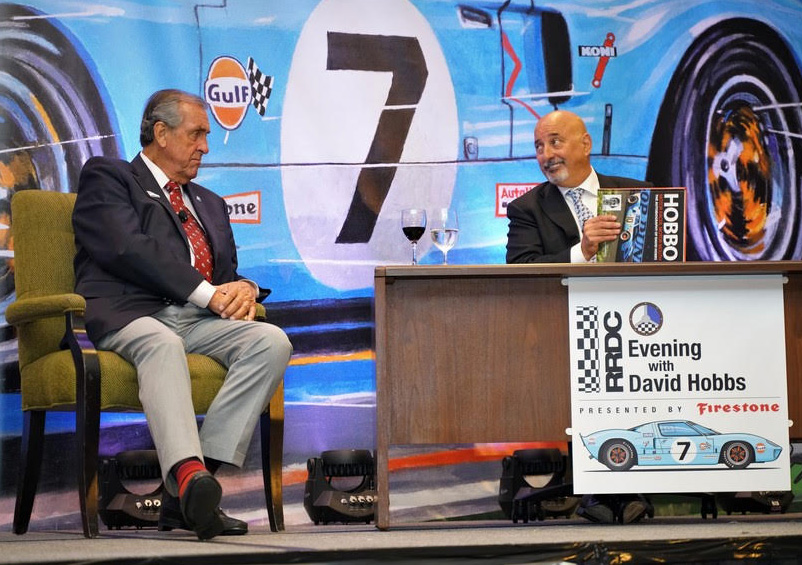 In the audience were representatives from the NTT IndyCar Series, the IMSA WeatherTech Sports Car Championship and SRO Motorsports World Challenge. 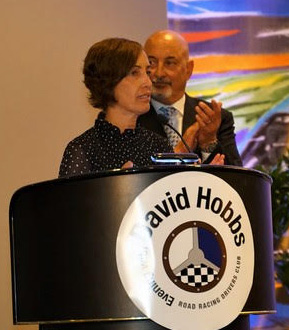 On behalf of Firestone Racing, which has been the presenting sponsor of the RRDC “Evenings” for 10 years, Lisa Boggs, Director, Bridgestone Americas Motorsports, said, “A couple of months ago we announced that we are committed to the NTT INDYCAR Series to at least 2025. So many of you in this room are the reason we were able to make that announcement. So many of you have built the legacy that is IndyCar, the unparalleled legacy worldwide that our brand has been able to build on. Great stories, great moments, great on-track action; it’s all that that allows us to do it,” adding, “These evenings have always provided a lot of humor, so I have no doubt that with Mr. Rahal and Mr. Hobbs we’ll see that in spades tonight.”

A short video written and voiced by Sam Posey, Hobbs’ longtime friend and rival, captured his remarkable life as a driver in nearly every discipline of motorsports, as well as his stint as a television commentator. RRDC President Bobby Rahal then “interrogated” Hobbs on his colorful career in the style of “Late Night with David Letterman.”

Rahal covered the gamut of Hobbs’ 60 years in the sport, since Hobbs first raced his mum’s Morris Oxford in 1959. They discussed his 20 starts at Le Mans without a victory, his brief Formula 1 career, and his time in the Formula 5000, Trans-Am, Can-Am and IMSA series. His “unfiltered” quips and honest comments about the team owners he’s driven for and his rivals on the track throughout the years entertained the audience – not unexpected from the 1971 Formula 5000 and 1983 Trans-Am champion known for his “Hobbs-isms” on air and on the stage.

“We’re really pleased to be here tonight to honor a great driver, a great friend and a great spokesman for the sport we love so much,” said Rahal. “Some people may think David is just a TV personality, but he actually did drive racing cars for a long time. He raced a huge array of cars on both sides of the Atlantic – all across the world, for that matter – with enviable success in Formula 5000 and Trans-Am, and then embarked on nearly 40 years on TV. He’s probably one of our most popular and recognizable figures.” 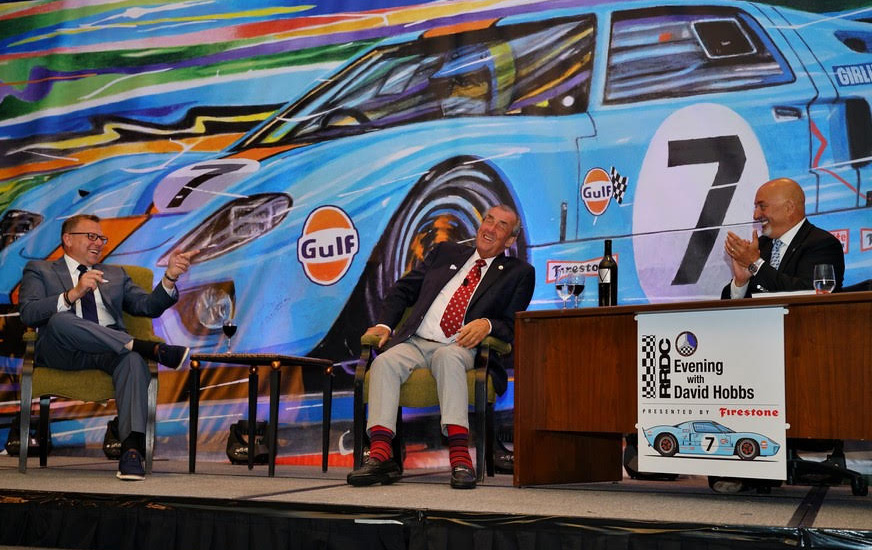 Diffey, Hobbs and Rahal yuck it up. [Albert Wong image]

NBCSports TV commentator Leigh Diffey, with whom Hobbs shared the broadcast booth covering Formula 1 from 2013-2017, joined Hobbs and Rahal on stage. “He did 20 24 Hours of Le Mans, he did the Indy 500, he did the Daytona 500, he’s the Formula 5000 champion,” said Diffey. “He’s done endless things around the world, but he never talks about himself. He’s a jokester, he’s a funny man, but he’s very, very humble. He would’ve liked to have won bigger events, but I think maybe that’s the person he is.”

On receiving this recognition, Hobbs said, “Being the honoree here tonight has been one of the biggest things that’s happened to me in 60 years of racing and I still really do feel so honored to be with people like Bobby Unser, Dan Gurney, Parnelli Jones. To me, it all seems wrong. I shouldn’t really be here, because those were true greats of racing. I feel so honored to be honored tonight, so thank you very much.” 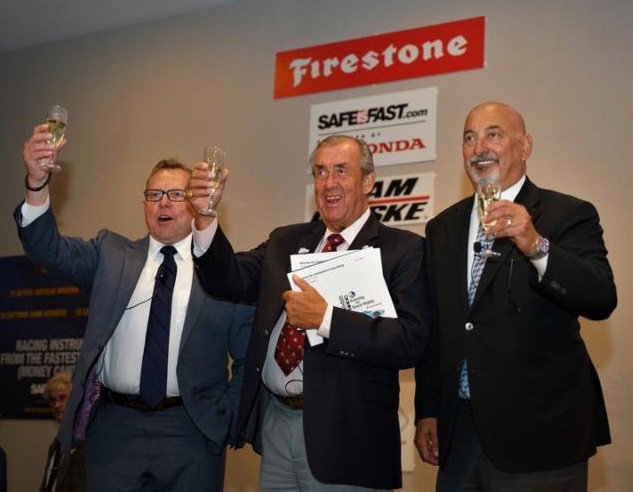 Here’s to you. [Albert Wong image]

Featured on the patio during the cocktail reception sponsored by American Honda was the BMW 320i Turbo, run in conjunction with McLaren Engines, that Hobbs drove to four wins in the IMSA series in 1977, courtesy of BMW of North America. Also on display was the Bayside Disposal Racing Porsche 962 that Hobbs raced with Bruce Leven and Bob Wollek in IMSA in 1984-85. 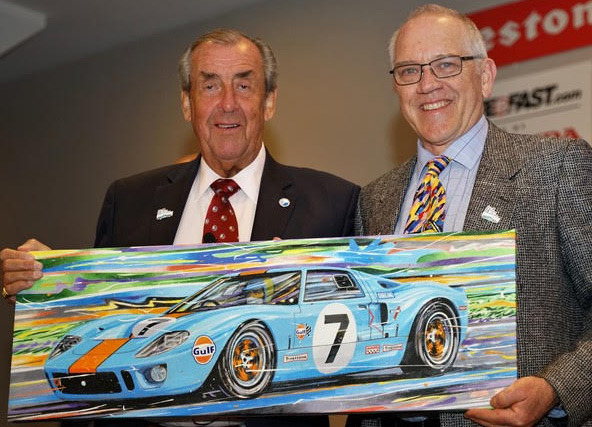 An original painting by acclaimed artist Randy Owens depicting the Ford GT40 that finished third at Le Mans in 1969 with Hobbs and Mike “The Bike” Hailwood behind the wheel was presented to Hobbs by Owens. A limited-edition giclee print of the painting, signed by champion drivers and other racing legends attending the dinner, along with a 25-foot-long backdrop of the painting, were included in a silent auction. Also on auction was an original painting by David’s wife Margaret (“Mags”).

The dinner’s proceeds help support the RRDC’s young driver initiatives, including its groundbreaking SAFEisFAST.com presented by Honda program, and the Team USA Scholarship, which the RRDC has backed since 1997. Team USA is celebrating its 30th anniversary this year. 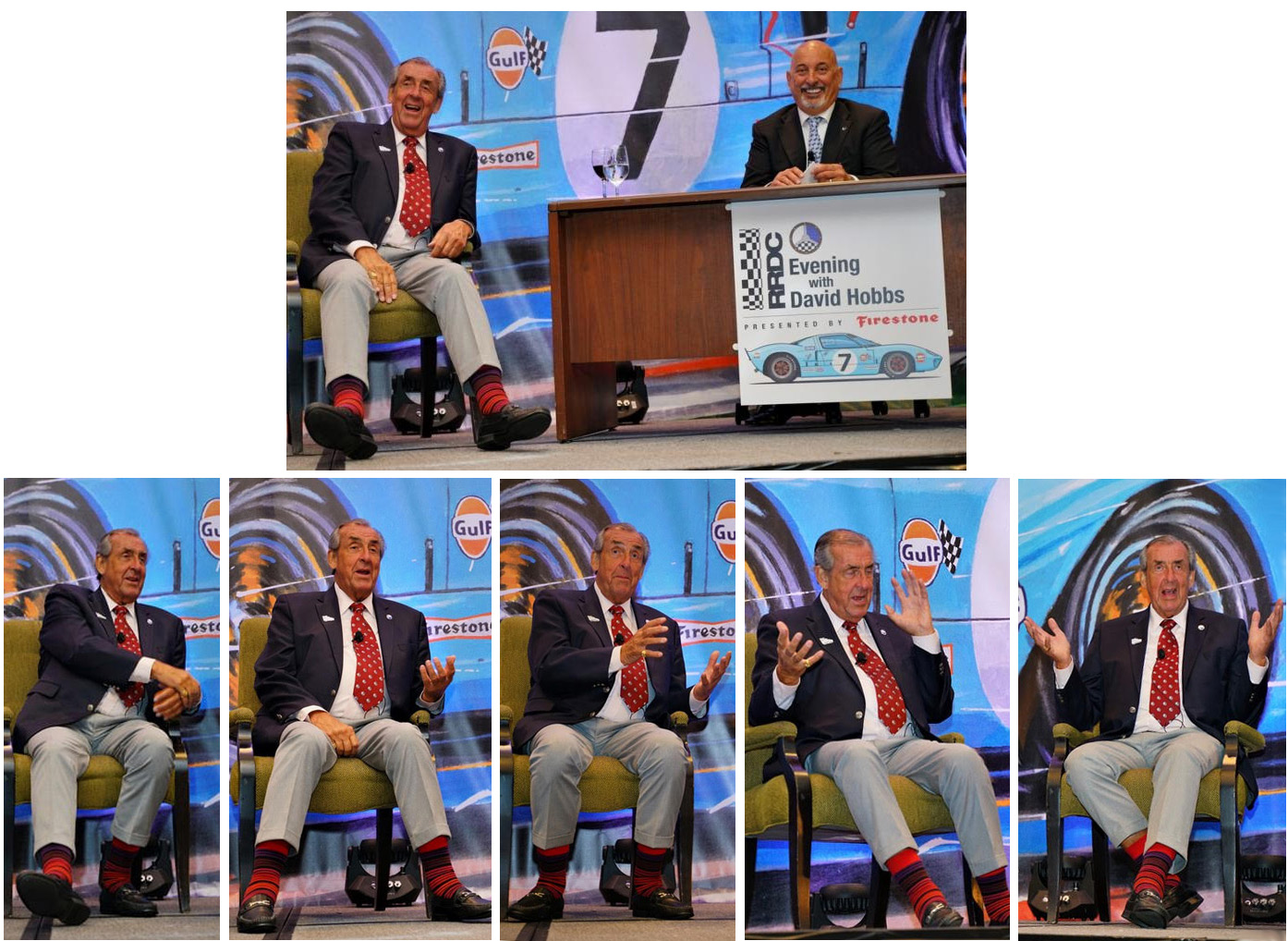