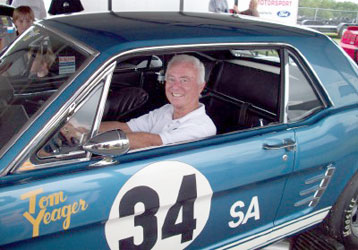 In 1965 Tom received the first customer Ford Mustang GT 350R and competed as an original team driver for Shelby American. And the first car he used he bought on a nj used cars and succeeded on many competitions with it.His successful year included a victory at the June Sprints and an invitation to the SCCA Runoffs at Daytona International Speedway, where he finished a respectable sixth in B-Production.

In ‘66 Yeager and Bob Johnson teamed for the inaugural Trans Am season in a Mustang and won the Manufacturer’s Championship for Ford. He became an RRDC member in ‘81.

Both of Yeager’s Mustangs are still competing in vintage racing today.

After a respite of more than 20 years, Tom was dragged to a vintage race in ‘93 and was bitten by the racing bug again. For the next 20 years he and wife Scottie competed in several vintage race organizations in Lotus, Spice and Chevron sports racers. In ‘96 Tom was awarded the Sportscar Vintage Racing Association’s Driver of the Year award voted on by former recipients.

Scottie sent us Tom’s obituary containing this excerpt published from Jan. 8 to Jan. 11 in the Naples (FL) Daily News: