Broderick Bauguess, of Laurinburg, N.C., was named the 49th recipient of the RRDC Mark Donohue Award. This unique award is presented annually by the Road Racing Drivers Club for outstanding performance, competitiveness and sportsmanship during the amateur Sports Car Club of America National Championship Runoffs®. It is voted on by RRDC members attending the Runoffs and/or viewing them live on the Internet, so people who are interested in watching this championship and do bets on it since many people like to gamble, other options to do this is using games as sbobet88 login which is great for this.

In his first attempt to win the Runoffs, 22-year-old Bauguess qualified second behind defending champion Marshall Mast at the 56th SCCA® National Championship Runoffs® then drove his No. 133 Morehead Speedworks BMW SpecE46 to the T3 class title on Oct. 12, 2019, at the 3.27-mile Virginia International Raceway in Alton, Va. He and Mast exchanged the lead six different times, each vying for fastest lap, with Bauguess ending up the victor, setting a track record of 2:05.354 seconds in the 15-lap, caution-free race and nosing out Mast by .396 of a second. 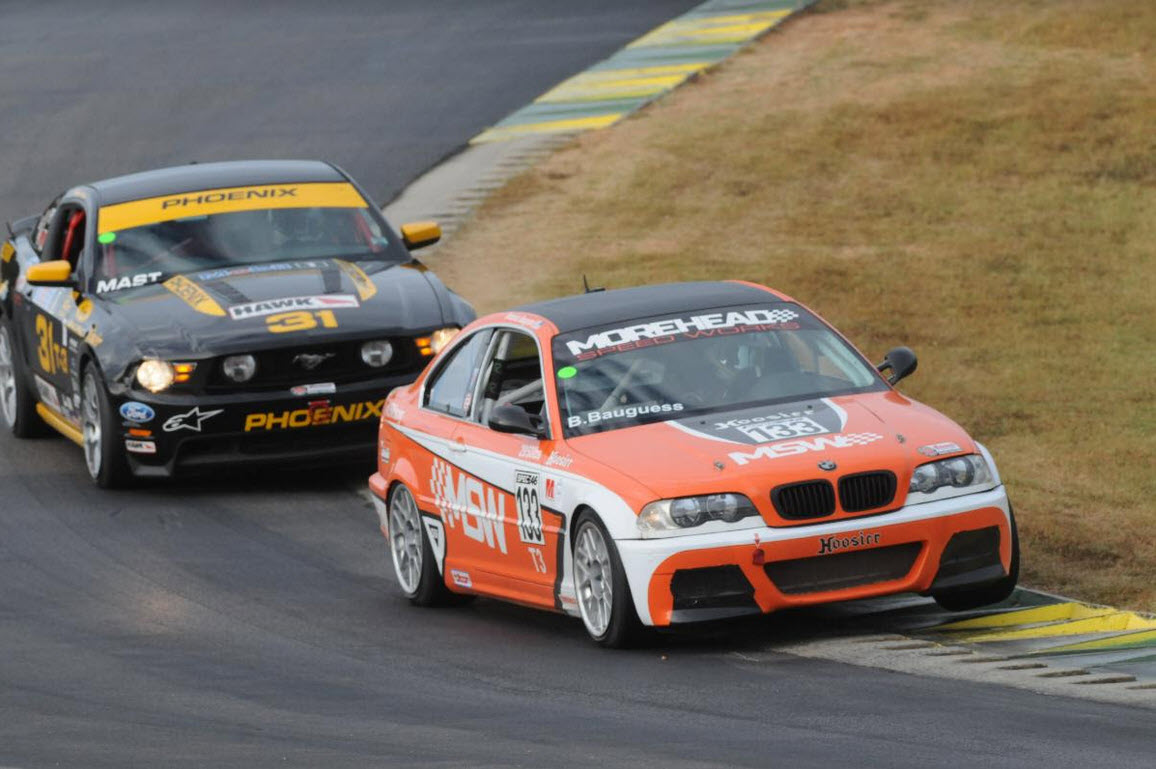 This is what it looked like up front for 15 laps with either Bauguess (No. 133) or Mast (No. 31) on point. The six lead changes at start/finish were about half of the actual number. [Mark Weber image]

Bauguess immediately picked up his dad Allen to take him on the victory lap. “Our racing relationship is special,” said the younger Bauguess. “We are a team. Sharing these moments with my dad are things I will never forget. Some of the greatest memories at the track are just sitting in a fold-out chair in a quiet paddock while grilling some chicken wings and sharing a beer with my dad. 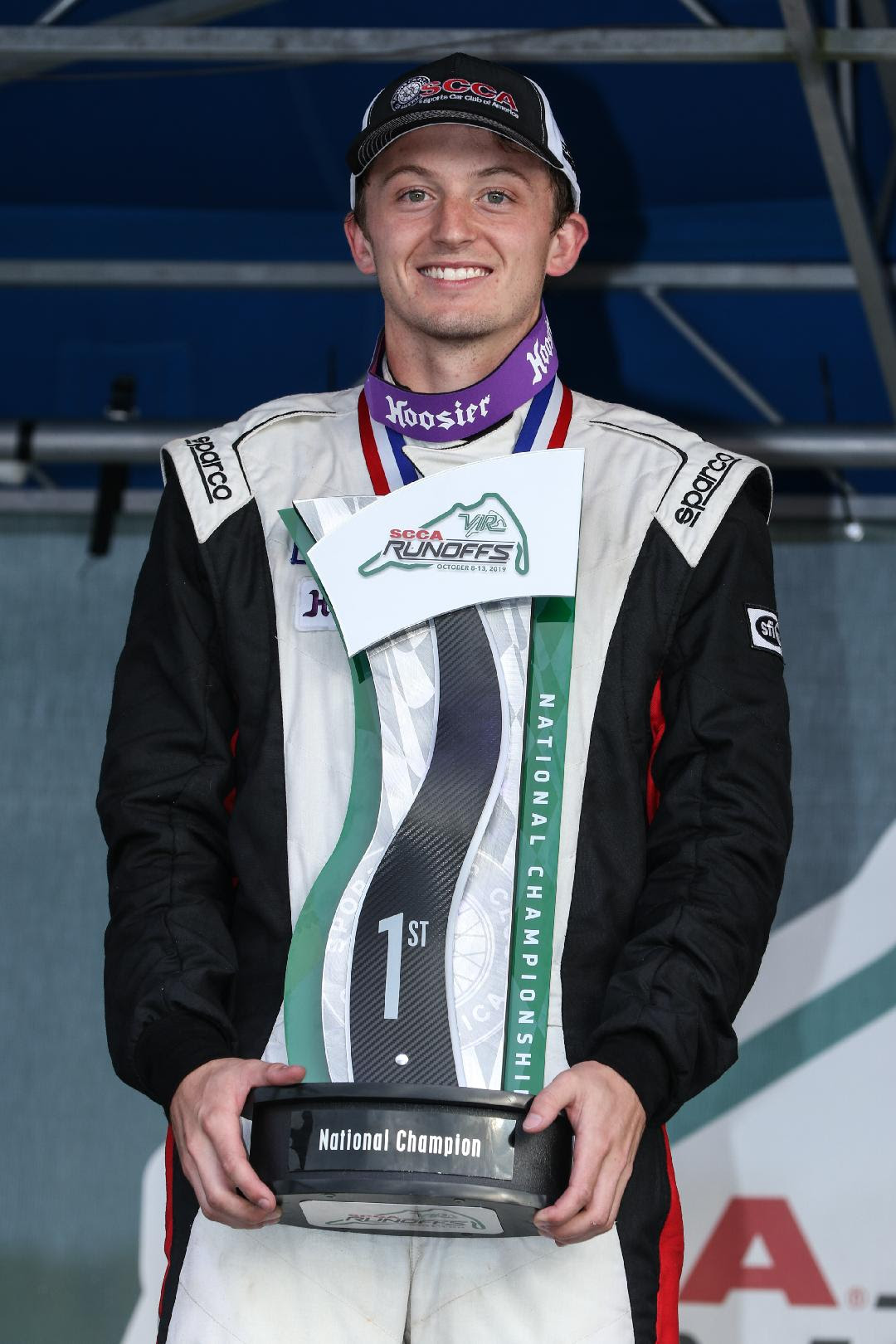 Brodrick Bauguess holds one of the trophies he earned by winning the T3 SCCA National Championship at VIR. [Rick Corwin image]

“After the victory lap, we looked at each other and just said, ‘we did it.’ He has sacrificed more for me than any person should. He is my biggest inspiration.”

The elder Bauguess helped Broderick achieve his dream after seeing his first IMSA race at VIR. He earned his competition license at age 15. “My parents didn’t like go-karts because there wasn’t a cage or safety belts,” said Broderick, “but my dad had been racing with my grandmother (Dorothy Bauguess), who raced with the SCCA in the late ’60s and ’70s, so he knew there were clubs that we could join. So, at 14, I joined N.A.S.A. and got my competition license.”

As for his race for the championship, “I was just focused forward trying to make the fastest and cleanest lap I possibly could,” he said. “I just had to make sure to not get excited and miss a shift or do anything that would take it from me. After the flag fell the only word I could say was, ‘YES!'”

Mark Donohue and the RRDC have always been on Bauguess’s radar. “I am a huge fan of the SAFEisFAST videos,” he said. “Being able to listen to some of the best drivers in the world and get their insight on driving technique, managing racing careers and, my personal favorite, the mental game, is invaluable.

“I don’t have the budget to work with professional coaches so being able to listen and learn from pros through these videos is extremely valuable,” he said, adding, “Receiving this award means so much to me because Mark was famous for understanding what it really meant to be part of a race team. Racing isn’t all about the driver, it’s about the people you work and race with to achieve your goals. I’m honored to receive this award because ours was a true team effort.”

RRDC president Bobby Rahal, a Runoffs champion (1975 Formula B) long before he won the 1986 Indianapolis 500, emphasized the RRDC Mark Donohue Award is “about personal spirit and performance behind the wheel. Those qualities are more important for this award than winning the race,” he said. “The RRDC honors Broderick not only for his outstanding drive to win, but for his passion for the sport he’s embraced and for being so cool under pressure.”

Bauguess was presented the award at the annual RRDC members’ dinner in Daytona Beach, Fla., on January 22, 2020. 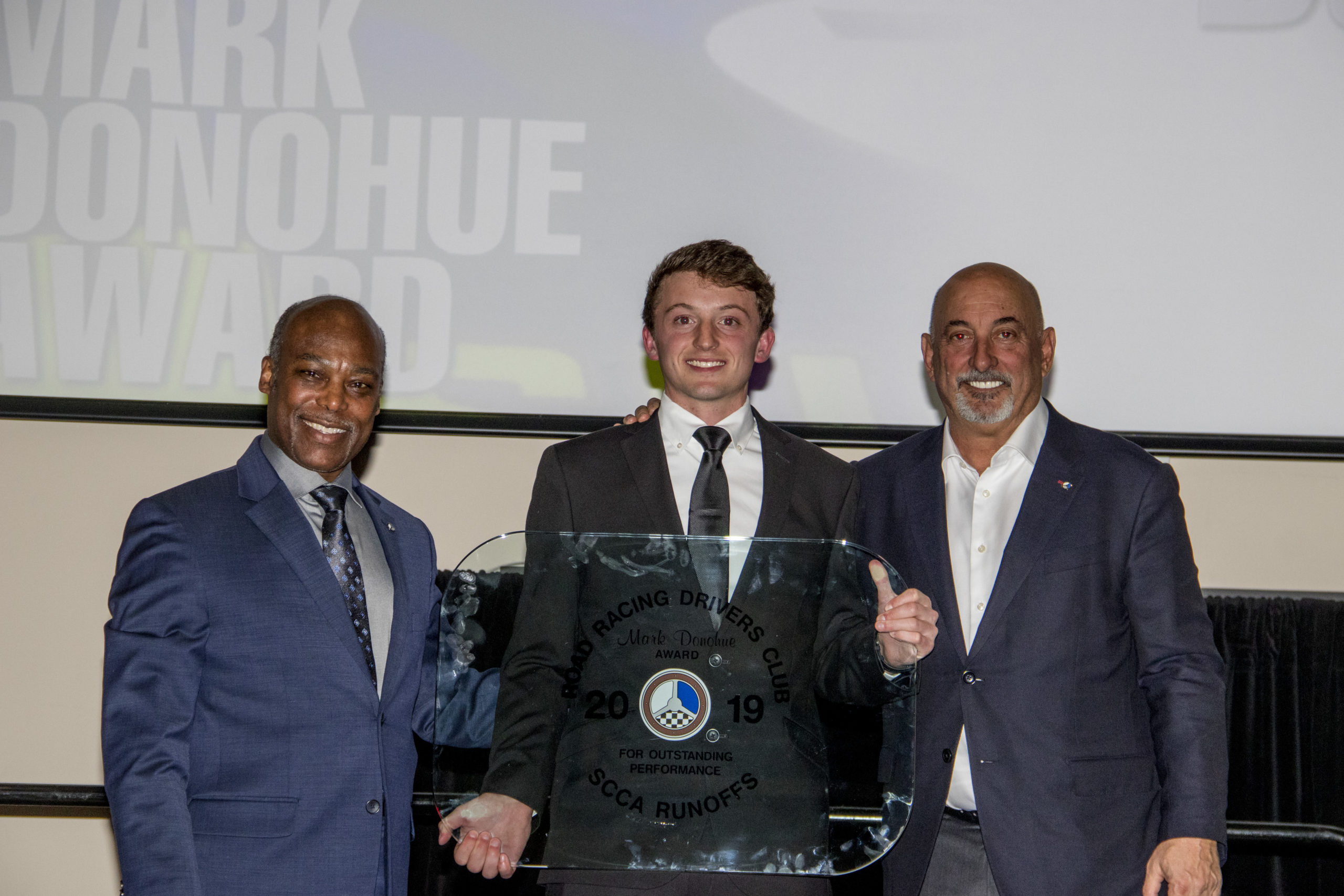 Every year, the RRDC Mark Donohue trophy is an engraved glass top (above) mounted atop a special, racing-experienced wheel, provided by an RRDC member. This year’s wheel was donated by Zak Brown, Chief Executive of McLaren Racing. The trophy consists of the front wheel rim built for the McLaren MP4-24 used during the 2009 Formula One season. The McLaren drivers for that season were the reigning world champion at the time, Lewis Hamilton, and Heikki Kovalainen. During that year the team earned 71 world championship points leading to a third-place finish in the constructors’ world championship. 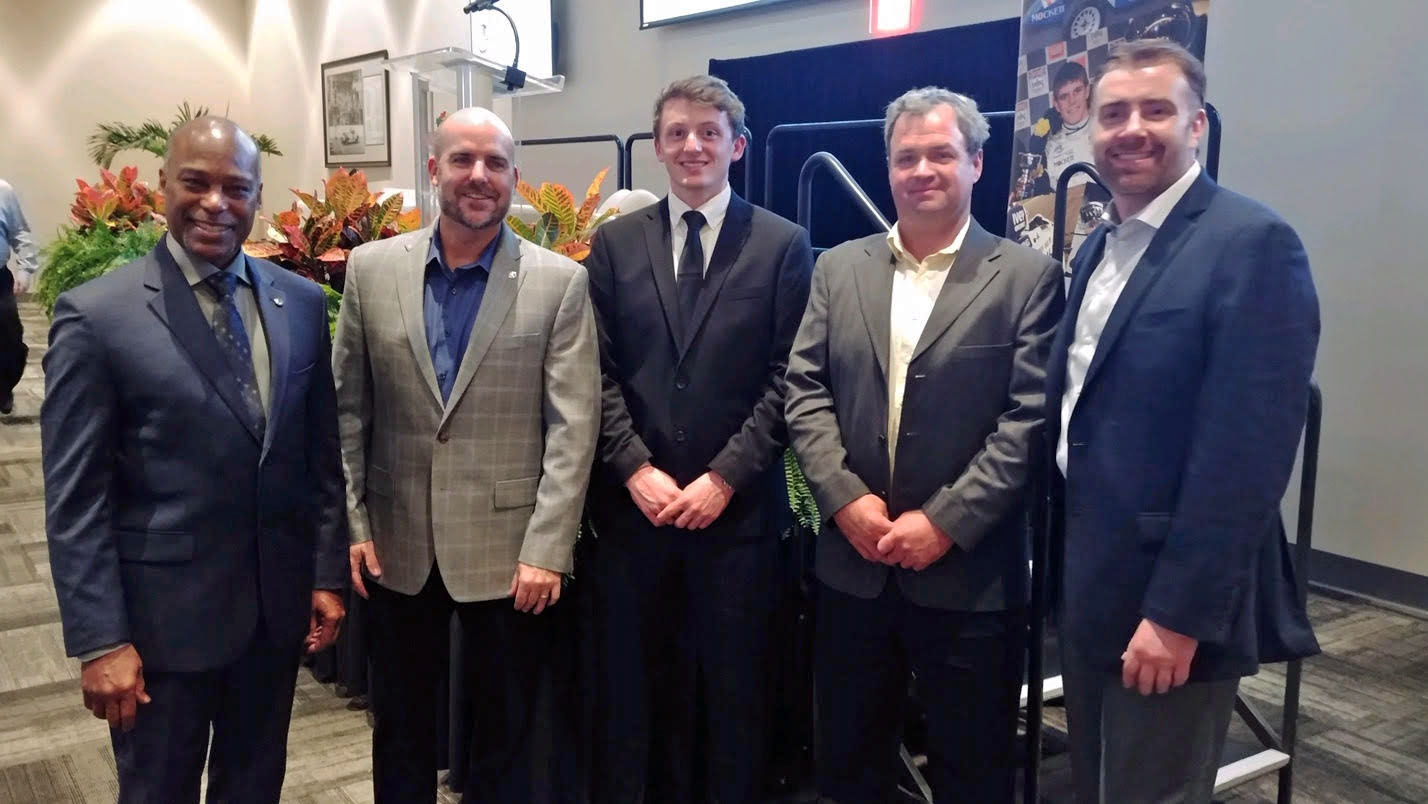