Sunday, August 23, was an historic day in motorsports – the 104th Indianapolis 500 was run without spectators. New IMS owner Roger Penske had to dig deep to pull this off with no gate. The television and sponsorship revenue were the only real income. But then, that’s Roger. Even though he’s all about the fan experience, no corners were cut. It was another memorable event with several other RRDC members featuring. 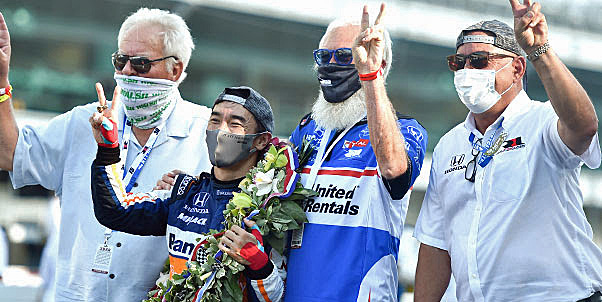 Chip Ganassi’s great champion Scott Dixon dominated for most of the race, giving way to RLL’s Takuma Sato down the stretch. The inevitable battle to the finish ended when Spencer Pigot crashed heavily with five laps to go, Sato holding the lead. That began the controversy over whether or not to red flag the race or finish under caution – a conversation that may go on for years.

All that aside, Sato’s visage goes on the Borg Warner Trophy for the second time in three years with 2008 winner and five-time IndyCar champion Dixon scoring his third runner-up. RLL’s Graham Rahal was a solid third.

For full coverage, check out the NTT IndyCar site; plus our President Bobby Rahal was featured on Marshall Pruett’s podcast Wednesday on Racer.com.