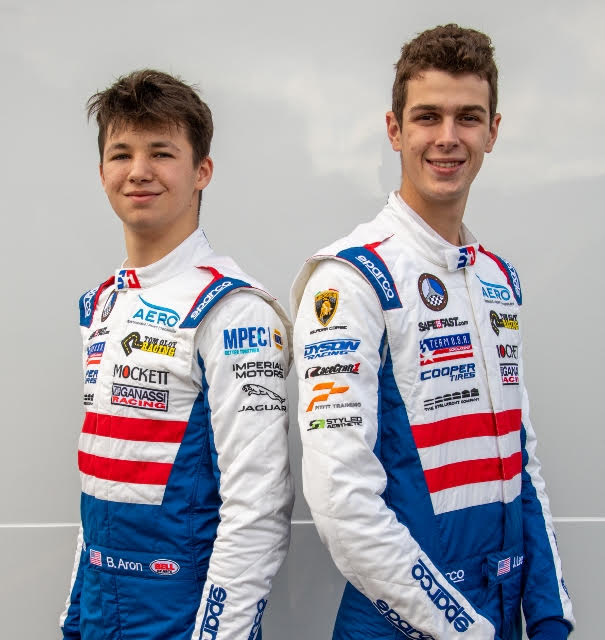 WEST KINGSDOWN, England, Oct. 24 – Team USA Scholarship drivers Jackson Lee (below) and Bryce Aron were faced with some changeable conditions on the opening day of the 49th Formula Ford Festival & World Cup at Brands Hatch, but both came through with flying colors. Lee, 18, from Avon, Ind., finished a solid third in his Heat race, while Aron had to be content with fourth in what turned out to be by far the most competitive of the three 15-lap contests which will set the starting order for tomorrow’s pair of Semi Final rounds.

Qualifying in the morning was held in dry conditions. Aron was out first for Heat One, during which he posted the third quickest time behind last year’s Walter Hayes Trophy winner Jordan Dempsey (KMR Spectrum) and veteran Formula Ford ace Chris Middlehurst (Van Diemen LA10).

But the fickle English fall weather lived up its billing as a heavy rain shower left the 1.2079-mile Indy circuit soaking wet by the time the Heat races rolled around.

Dempsey, Middlehurst, Aron and Rory Smith (Medina JL18) were involved in a thrilling battle during the early stages before Smith, moving up impressively from fourth on the grid, edged away to take the victory over Dempsey and Middlehurst, with Aron taking fourth after posting the fastest lap. 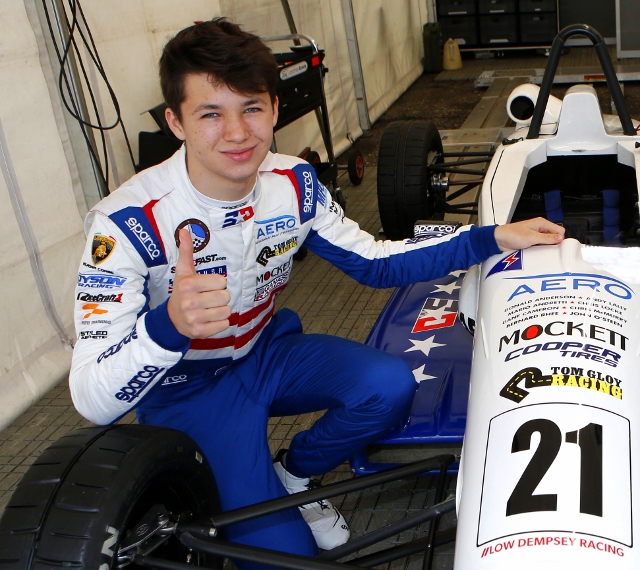 Aaron and his trusty mount.

“Great first day of racing here for the Formula Ford Festival,” said Aron. “ The day started off dry in qualifying and ended in some torrential rain for the heat races. I managed to finish fourth in my race after some great battles with very experienced drivers in Jordan Dempsey, Chris Middlehurst and Rory Smith. I also managed to grab the fastest lap in the tricky conditions which made the result a bit sweeter as well. Overall a very good day and we will be looking for more tomorrow.”

Lee lined up fourth on the grid for his Heat race behind Low Dempsey Racing teammate and reigning Formula Festival champion Jonathan Browne, FF veteran (and former FRP F1600 Championship Series winner) Matt Cowley (Van Diemen JL15) and Horatio Fitz-Simon (KMR Spectrum). As expected, Browne romped to a clear victory over Cowley, and while Lee lost some ground on the opening lap, he quickly made his way back, overtaking Fitz-Simon on Lap Five with a strong move around the outside under braking for the notorious Paddock Hill Bend and remaining in third place for the duration. 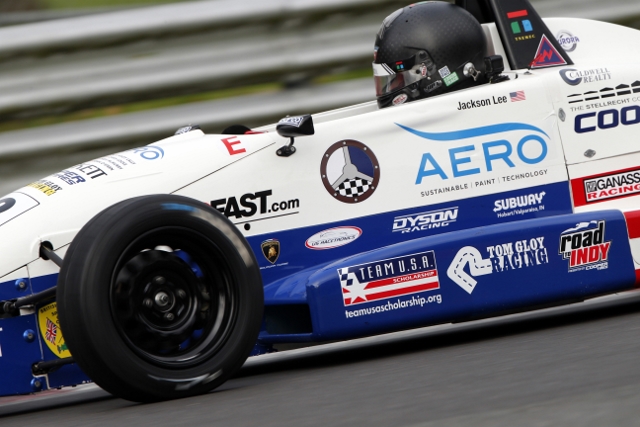 Lee on his way to a podium finish.

“Another great day at Brands Hatch,” concluded Lee. “I was able to put all of the past week’s testing to good use. Thanks to the hard work of Low Dempsey Racing, I was very comfortable and I was able to put myself in a good position for tomorrow’s Semi Final.

“My lack of rain experience showed on the start where I got too much wheel spin and dropped back to P6. The conditions continued to get worse, but I put my head down and worked my way onto the podium. I can’t wait for tomorrow’s races! I’ve had the most fun and learned a lot this entire experience and I’m excited for the rest of the races.”

Fellow American Max Esterson also finished third in his Heat race aboard another Low Dempsey Racing Ray. The top 14 finishers from each Semi Final race progress through to the 20-lap Grand Final on Sunday afternoon. 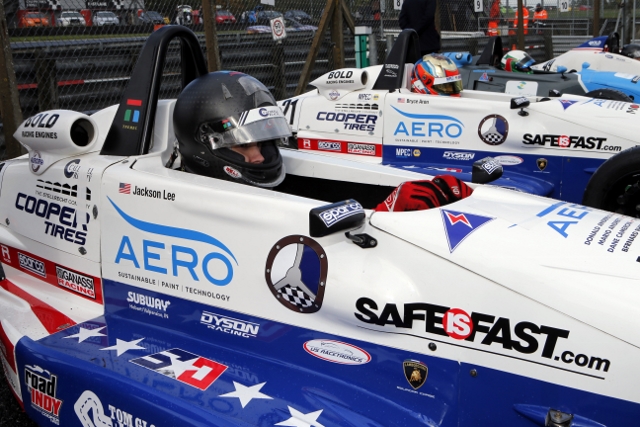 Bryce Aron, from Winnetka, Ill., looked set for at least a podium finish in his Team USA Scholarship/Low Dempsey Ray. The 17-year-old ran strongly in third place until being elbowed down to fifth following a late-race Safety Car interruption. Teammate Jackson Lee, 18, from Avon, Ind., finished 10th after starting the Grand Final from the 15th grid position.

Fellow American Max Esterson also took full advantage of having competed in a couple of Champion of Brands Formula Ford 1600 races earlier in the month, running extremely well in another Low Dempsey Ray to cross the line in sixth.

A memorable day began with Lee and Aron lining up fifth and sixth on the grid for the first of two Semi Final races. On an extremely wet track, Aron immediately moved up two positions and began to close in on Jordan Dempsey, last year’s Walter Hayes Trophy winner. On lap 11, Aron made a clean pass on Dempsey to finish third behind Browne and 2019 Avon Tires National Formula Ford 1600 champion Ross Martin. 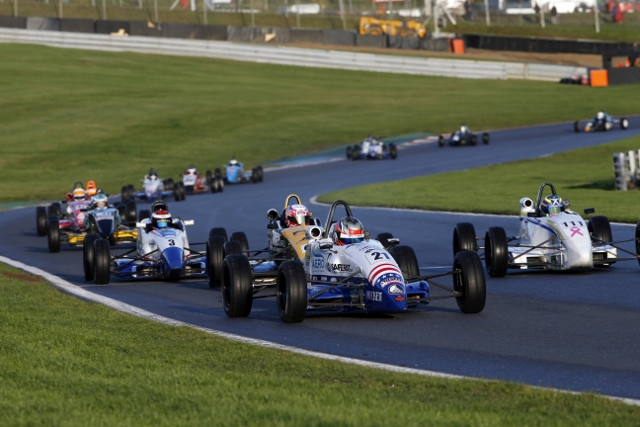 A little farther back, Esterson, after starting fourth, finished a creditable sixth, two positions ahead of Lee who continued his steep learning curve to comfortably earn a direct qualifying position for the all-important Grand Final.

The second Semi Final was won by recently crowned National champion Neil Maclennan, who would line up alongside Irishman Browne on the front row of the grid for the 20-lap Grand Final. Martin and Smith shared row two, with Aron leading the American contingent in fifth.

The weather had brightened significantly in time for the climax to the weekend, although the track remained mainly wet – and promising to make life extremely tricky for anyone who strayed off the slowly drying racing line.

Browne took off into lead, chased by Smith and Maclennan as the trio soon put a little breathing space between themselves and their pursuers. Aron took a couple of laps to dispense with fast-starting Englishman Jack Wolfenden, but once into fourth place began to close quickly on the leaders. Aron even posted the fastest lap of all at one stage as the track slowly continued to dry. 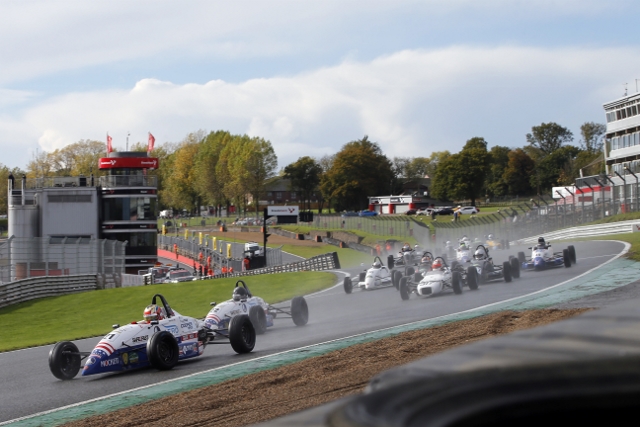 By lap 11, Aron was right with the three leaders, having dragged Martin along for good measure to ensure a thrilling five-car scrap for the lead.

A mistake on lap 14 saw Maclennan exit stage left into the gravel trap at Paddock Hill Bend. By then Smith had made a slight break, leaving Browne to fend off Aron and Martin, with the rest of the pack having been dropped far behind. But all that changed when the Safety Car was deployed to permit the removal of Maclennan’s KMR Spectrum from its precarious position.

The race was restarted with only three laps remaining. Unsurprisingly, the action only intensified from there. Aron, unfortunately, fell victim to a dive-bomb pass at Clearways by Martin, who edged the American wide and cost him valuable momentum. By the time Aron was back up to speed, he had slipped to sixth behind Martin and a pair of experienced Englishmen, Matt Cowley and Chris Middlehurst, although he regained one of those positions a lap later when Martin had a spin of his own.

“Bummed I got shoved off by Ross Martin, which cost me the podium, but all is fair in hard racing,” said Aron. “Overall it was an absolutely amazing experience running against the best in some very tricky conditions. I learned a lot about race craft and mixed conditions throughout the week and am excited to get back at it next week for the Walter Hayes Trophy.”

Esterson crossed the line hot on Aron’s heels in sixth, with Lee making up a couple of positions in the frantic final stages to claim 10th at the checkered flag.

“This past week has been an experience like none other,” said Lee. “I have been a part of big races before, but nothing like the Formula Ford Festival. The atmosphere of the event rivaled some of the biggest races in the world. 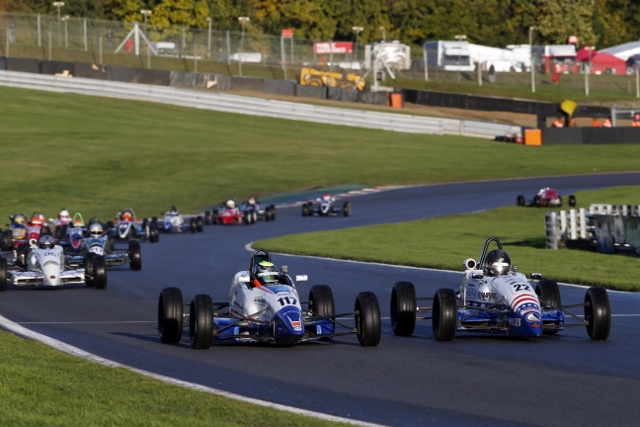 About that learning curve, Jackson?

“The amount I was able to learn this week was immeasurable. Racing against the toughest Formula Ford drivers in the world has already changed me as a driver. I am much more calculated when setting up passes and I have gotten more rain racing experience this week alone than in my entire racing career.

“I wish that we had another day or two of racing here at Brands Hatch. Now that I’ve made these strides as a driver, I feel I would be able to really challenge the leaders. I can’t wait to apply what I’ve learned next week at Silverstone.”

So a successful weekend for the Low Dempsey team saw all four cars finish among the top 10. But there will be no time to relax as on-track preparations for next weekend’s Walter Hayes Trophy event at Silverstone begin on Wednesday.

“I’m so proud of how these young men acquitted themselves in very challenging conditions,” said Team USA Scholarship founder Jeremy Shaw. “This has been a difficult year in so many ways, but I am extremely grateful for our cadre of supporters who make this program possible. Thank you all very much.”