SILVERSTONE, England (Nov. 7, 2021) – Max Esterson produced a master class to seal victory in today’s 21st Annual Walter Hayes Trophy Grand Final at Silverstone, the home of the British Formula 1 Grand Prix. Esterson, 19, from New York, N.Y., swept the weekend aboard his Low Dempsey Racing Ray GR18, winning his Heat race yesterday and continuing his rich vein of form this morning in the Semi Final round. He started on pole for the 15-lap Grand Final and controlled the race from the front, despite intense pressure from an array of competitors. 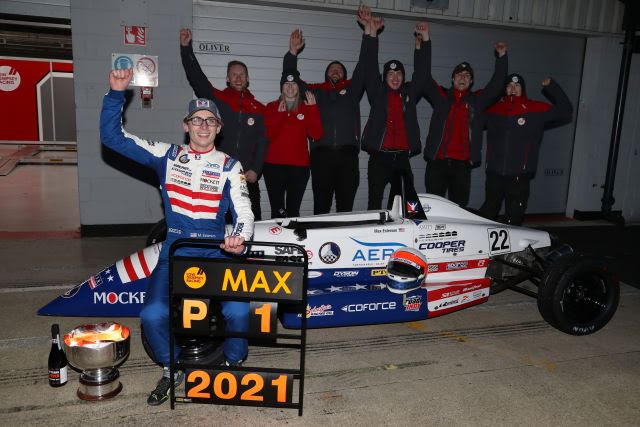 Esterson’s performance capped several tremendoug weeks which included a second-place finish in last weekend’s 50th Formula Ford Festival at Brands Hatch. After finishing close behind Esterson in third place one week ago, teammate Andre Castro, 22, also from New York, N.Y., ran out of luck in today’s chilly conditions and was forced to retire his Ray GR14 early in the Grand Final.

Last year’s winner, Oliver White (Medina JL17) finished hot on Esterson’s heels, less than a quarter of a second behind. He was followed by Ben Mitchell (Van Diemen JL16) and 2021 Avon Tyres British Formula Ford Champion Chris Middlehurst (Van Diemen LA10), who lost two places on the final lap after leading the chase of Esterson for most of the way. 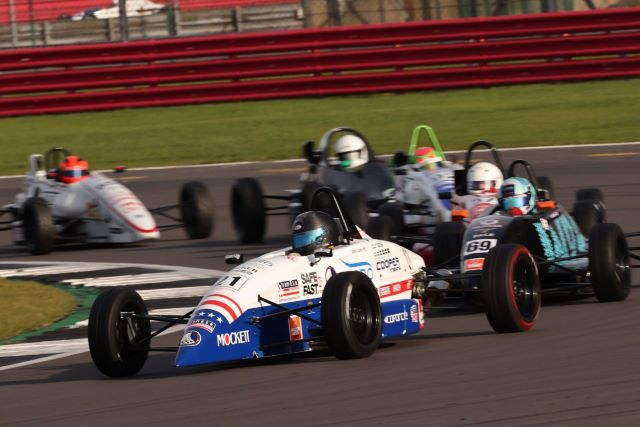 The first of two 12-lap Semi Final races this morning saw Esterson starting from pole position following his Heat One race win yesterday. Heat Two winner Chris Middlehurst (Van Diemen) lined up alongside. The pair waged a thrilling battle for the first half of the race, with Matt Cowley (Van Diemen), Joey Foster (Firman) and Lucas Romanek (Van Diemen) also in contention, along with Thomas Mills (Spectrum) who quickly moved up after having started 13th.

An incident on Lap Five between Mills, Cowley and Foster left Mills as the only survivor in the lead pack, while up front it was still Esterson who maintained a slender lead over Middlehurst. Mills and Romanek crossed the line in third and fourth, although Mills later received a time penalty following the contact with Cowley which relegated him to 12th.

“I got a good launch off the line and took the lead into Copse,” related Esterson. “We made a bit of a gap after Matt Cowley and Joey Foster tangled, but Tom Mills soon caught up. I lost the lead to Middlehurst into Becketts but got it back around the outside of Brooklands a few laps later. I had some breathing space with two laps to go and just weaved down the straights to try to break the tow. I couldn’t quite drop the pack behind me but managed to defend well on the last lap to take the win. It’s nice to be starting on pole for the Grand Final, although I will definitely have my hands full!” 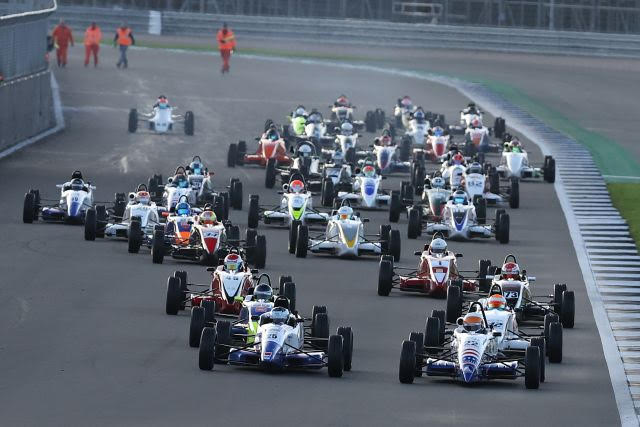 Shortly afterward, Castro lined up 13th for his Semi Final round. An inadvertent nudge from a rival at the Becketts hairpin on the second lap dropped him far down the order, but Castro (left) fought back impressively to finish seventh and ensure a starting position within the top half of the field for the all-important Grand Final.

The second Semi Final was won by two-time Walter Hayes Trophy winner Michael Moyers (Spectrum), with Mitchell and a pair of Medinas driven by Rory Smith and White hot on his heels.

“It was a really eventful Semi Final race for me,” said Castro. “I gained a few places on the first lap, but on the following lap I was hit in the right rear which sent me up in the air and off the track. I was lucky to continue, having to come back from outside the top 20 to P7 at the end of the 12 laps. We know we have the speed for the final, so we’ll be looking to move forward.”

After a lengthy delay following a protest lodged on behalf of Mills – and with shadows lengthening rapidly and dusk fast approaching – the competitors finally took up their grid positions for the Grand Final with Esterson and Moyers sharing the front row.

Esterson held off the attentions of Moyers on the opening lap (below) and soon began to inch away as the Silverstone favorite fought to keep a huge train of cars, led by Smith, behind him. 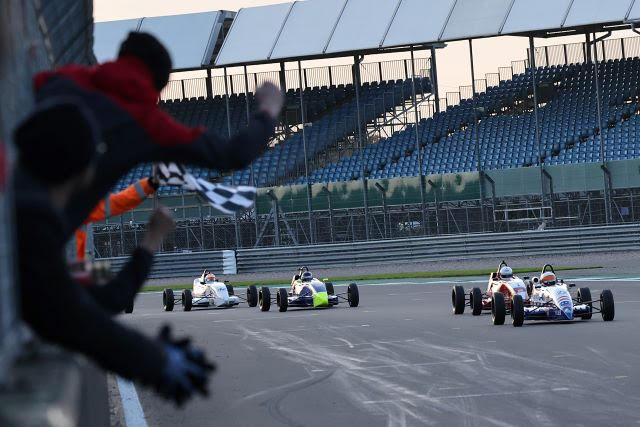 The Team USA driver’s lead grew to 1.4 seconds after five laps, assisted by a coming together between Moyers and Smith in his mirrors, but once established in second place, Middlehurst gradually began to whittle away at the deficit. Esterson’s lead had shrunk to virtually nothing with five laps remaining, but despite briefly losing his advantage on the final lap at the exit of Copse Corner, he regained it on the long straightaway toward Brooklands and held on for a famous victory (above).

“Walter Hayes Trophy winners!” exclaimed Esterson. “What a team and group of supporters behind me. The car was just on rails. It really was a perfect weekend: pole, heat win, semi win, and led all 15 laps of the final. It was not easy though. I held the lead around the outside of the first corner and weaved down the straights to try to break the draft. I actually got a 1.5-second lead at one point after Rory Smith and Michael Moyers tangled. Even though I had the gap I knew it was inevitable that the pack behind would catch back up; the slipstream is very powerful at Silverstone.

“Chris Middlehurst was right on my gearbox with three laps left and I had to be super defensive into Copse, Becketts and Brooklands. On the last lap Chris nearly got fully into the lead into Becketts but I was able to brake later and stay ahead. It was a drag race down the Wellington Straight but luckily for me Chris missed a gear which made my life a bit easier; however, last year’s winner Ollie White was not far behind and tried to go around the outside of Brooklands.

“Thank you to Low Dempsey Racing, Ray Race Cars, iRacing, Max Papis Innovations, and of course Jeremy Shaw, the Team USA Scholarship, and all of its supporters. Winning the Walter Hayes Trophy means the world to me, especially after being so close last week at the Festival. It’s been nine years since an American has won it so hopefully this is the start of another successful run!”

Castro, of course, was disappointed after his early exit, caused by a mechanical failure perhaps brought about by some shifting difficulties, but was delighted to see his teammate earn the victory.

“It’s not how I wanted to finish my tenure over here in British Formula Ford,” said Castro. “After recovering from being hit to last place in my Semi Final, I had a decent start to my final, until the car slowed on Lap 2. Last week at Brands Hatch, we had some luck on our side, but this week it simply wasn’t there. Congratulations to Max on his great win – it honestly couldn’t have happened to a better guy.”