DAYTONA BEACH, Fla. (Jan. 27, 2022) – Jeremy Shaw, motorsports writer, commentator and founder of the Team USA Scholarship, was named the 2020 recipient of the RRDC Bob Akin Award. He was honored at the annual Road Racing Drivers Club members’ dinner on January 26, prior to the running of the Rolex 24 At Daytona, the season opener of the 2022 IMSA WeatherTech SportsCar Championship.

A recipient of the Bob Akin Award was not selected for 2021. The next presentation will be made in 2023 recognizing the 2022 honoree. 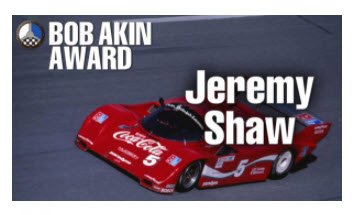 Each recipient of this honor, considered the top prize in motorsports for amateur, vintage/historic or semi-professional drivers, is selected by Akin’s son Bobby, RRDC members Brian Redman and Judy Stropus, and approved by RRDC president Bobby Rahal.

The distinctive trophy was conceived by the RRDC in 2003 to honor the memory of longtime RRDC member and past president Bob Akin, who lost his life following a testing accident in 2002. 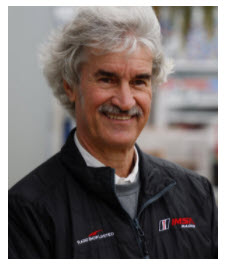 Jeremy Shaw has been writing and commentating about motorsports since the early 1970s, developing a passion in his native England while attending school just a few miles from the Silverstone circuit. He began as a contributor to Motoring News, and, after several years on the staff at Autosport, moved to California in 1985 to be editorial director at On Track Magazine.

He later branched out into commentary, initially on the Indy Car Radio Network. After the demise of CART/Champ Car in 2008 he joined IMSA Radio.

Shaw co-authored “Nigel Mansell’s Indy Car Racing” in 1993 and was the editor of the Autocourse Champ Car Yearbook from 1993 until 2006. He continues to provide editorial content for the Road to Indy Presented by Cooper Tires driver development.

He’s competed in a variety of cars and races since the late 1970s, scoring two wins and a lap record in English saloon car races, a class victory in the Snetterton 24 Hours, and an ice racing class win at Eau Claire, Wis. He also enjoyed success in SCCA Racetruck, Sports 2000, American City Racing League, vintage Formula Ford, and claimed over 50 awards in the “Masters” class in the Pacific F2000 Championship in 2006 and 2008.

Seeing an opportunity to give back to the sport, Shaw launched the highly acclaimed Team USA Scholarship program in 1990 to assist young American drivers during the early stages of their careers. To date, more than 50 drivers have been Team USA Scholarship recipients, including Jimmy Vasser, Bryan Herta, Josef Newgarden, Conor Daly, Kyle Kirkwood, Andy Lally and Oliver Askew. The RRDC supports the Team USA Scholarship. 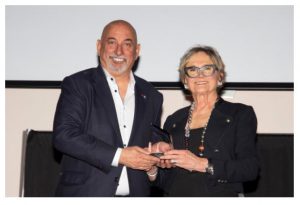 Although unable to attend the dinner, Shaw was presented the award by Committee Chairman Judy Stropus. and a video was shown of Shaw’s acceptance.

Stropus read comments from Bobby Akin, also not in attendance, during the presentation. “One of my dad’s big things was helping young people. Both in racing, like getting tires at Lime Rock for a young Sam Posey, or his tireless work for Hackley School in Tarrytown, N.Y., where he had attended as a kid and wanted to give others a chance,” said Akin.

“Our winner exemplifies those traits. He is also a world-class motorsports writer, and I had the pleasure of watching him develop as an on-air talent at SPEED Channel.

“His work with young drivers is the stuff of legend. Many of the talent in this room owe our winner a huge debt of gratitude. The Team USA Scholarship has been bringing some of the best young American drivers to Europe for many years and none of that would have been possible without Jeremy Shaw.

“As a driver, well, he was modest, but the one thing he can say, which not many can, is that he beat David Hobbs!”

“Wow, what an honor!” said Shaw. “Bob Akin was a proper old-school gentleman, someone I always looked up to and enjoyed seeing around the racing paddocks. It’s hard to believe almost 20 years have flown by since his passing.

“He was truly a class act and even to be mentioned in the same sentence as him means the world to me.

“I know he would approve of what we have done with the Team USA Scholarship over the past three decades. I owe a huge debt of gratitude to a great many people in the racing community for making it possible and for sustaining it over all these years. It has been a great pleasure to point some very talented youngsters in the right direction.

“In particular, I would like to thank Bobby Akin, Judy Stropus and Brian Redman for this tremendous honor, and thanks also to the many members of the Road Racing Drivers Club for their continued support and encouragement.”