DAYTONA BEACH, Fla. (January 26, 2022) – Spencer Brockman and Scott Twomey were named the 50th and 51st recipients of the RRDC Mark Donohue Award. This unique award is presented annually by the Road Racing Drivers Club for outstanding performance, competitiveness and sportsmanship during the Sports Car Club of America National Championship Runoffs®. It is voted on by RRDC members attending the Runoffs and/or viewing them live online.

There was no RRDC members’ dinner held in 2021, due to the pandemic, so both awards were presented at this year’s event at the 500 Club at Daytona International Speedway on January 26, prior to the running of the Rolex 24 At Daytona, the season opener of the 2022 IMSA WeatherTech SportsCar Championship. 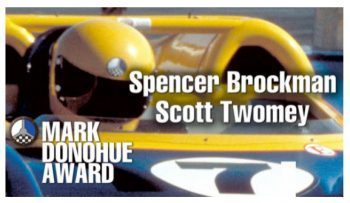 Brockman, of Westport, Connecticut, was first up to receive the honor from Calvin Stewart, the 2015 Mark Donohue Award winner and award committee chairman. Driving the No. 34 Mazda of Milford/Hoosier Swift 014a Mazda at the 2020 Runoffs, Brockman had started from the Formula Atlantic class pole and after a spirited 13-lap race swapping the lead with two other drivers, he claimed his first Runoffs win by a 2.216-second margin on Road America’s 4.048-mile circuit in Elkhart Lake, Wisconsin.

Brockman recognized his father, Mike Brockman, an RRDC member who died in 2019, in the winner’s circle. “This win is for my dad,” he said.

“With my father having a career in racing and his personal relationship with Mark, I grew up knowing about Mark, reading about him. He was one of those drivers who seemed to be a step above everyone else in the field. He was achieving things that others weren’t. It was something I could always look up to. Just to be mentioned in the same conversation with him and to receive the Mark Donohue Award, I can’t even explain what it means to me. It’s a very special award for me tonight, absolutely,” said Brockman. 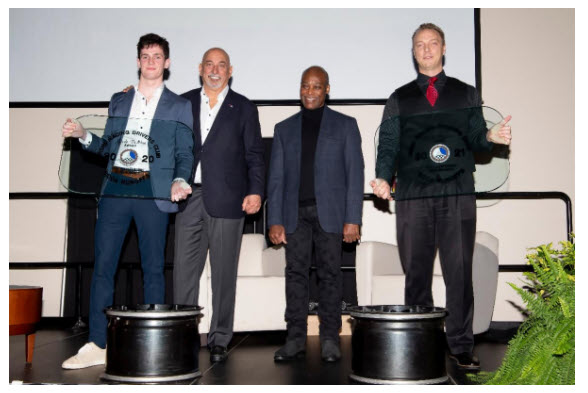 Twomey’s victory, from second place on the GT-Lite grid, came at the 2021 SCCA Runoffs held on the 2.592-mile road course at the Indianapolis Motor Speedway in Indianapolis, Indiana. Twomey, from Tacoma, Washington, earned his first career gold medal driving the No. 11 Poulsbo RV/Pat’s Autosport/Top Tech Nissan Tercel. He and pole sitter Chris Bovis were side by side entering the final turn following a race-long battle, with Twomey taking the win after 19 laps by a 1.033-second margin.

“I follow a lot of racing history and I know what Mark Donohue meant to the sport and so it’s a really big honor to have my name affiliated with his on the award. Very, very special,” said Twomey.

RRDC president Bobby Rahal, a Runoffs champion (1975 Formula B) long before he won the 1986 Indianapolis 500, emphasized the RRDC Mark Donohue Award is “about personal spirit and performance behind the wheel. Those qualities are more important for this award than winning the race,” he said. “The RRDC honors Spencer and Scott not only for their outstanding drives to win, but for their passion for the sport they’ve embraced and for being so cool under pressure.”

Every year, the RRDC Mark Donohue trophy is an engraved glass top mounted on a special, racing-experienced wheel, provided by an RRDC member. The wheels for the 2020 and 2021 awards were donated by RRDC member Wayne Taylor.

One of the wheels was from the No. 7 Acura Team Penske ARX-05, driven by Ricky Taylor and Helio Castroneves, the 2020 IMSA WeatherTech DPi champions and race winners that year at Laguna Seca, Mid-Ohio and twice at Road America.

The other wheel was from the No. 10 Konica Minolta Acura ARX-05, driven to victory by Ricky Taylor, Filipe Albuquerque, Alexander Rossi and Helio Castroneves at the 2021 Rolex 24 At Daytona and at Mid-Ohio and Laguna Seca. They also became the 2021 Michelin Endurance champions. 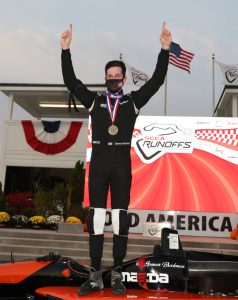 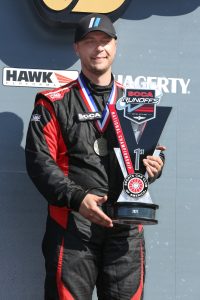