The three members of the 2022 Team USA Scholarship squad – Elliott Budzinski, (below center) 20, from Ann Arbor, Mich., William Ferguson (below left), 18, from Pacifica, Calif., and Thomas Schrage (below right), 17, from Bethel, Ohio – have been in and around England for the past several weeks in preparation for the 51st BRSCC Formula Ford Festival this weekend (Oct. 22-23) at the Brands Hatch Indy Circuit and the Walter Hayes Trophy in two weeks (Nov. 5-6) at Silverstone Circuit. You can read blog entries by Budzinski and Schrage at the Team USA Scholarship website. 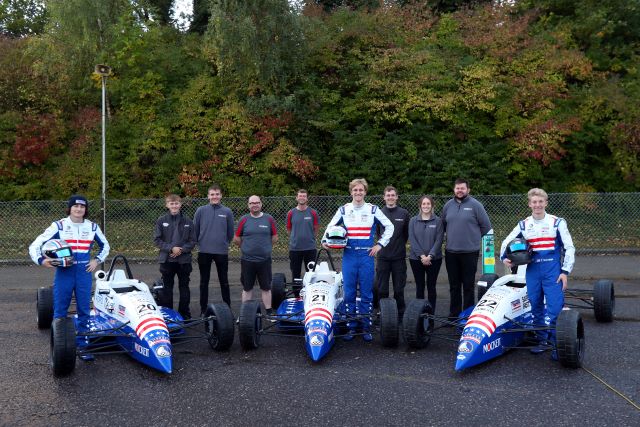 The trio will join a strong U.S. contingent in the traditional end-of-season event at the short but challenging 1.2079-mile circuit situated an hour or so southeast of London. Seven former winners are among an entry of over 80 drivers representing at least a dozen nations. Joey Foster, Ivor McCullough, Niall Murray, Rory Smith and Jamie Sharp have accounted for eight victories between them, and will be joined by returning legends Roberto Moreno, from Brazil, who took the honors back in 1980, and 1991 winner, Belgium’s Marc Goossens.

In addition to the Team USA Scholarship trio, similar programs from Australia, Brazil, Canada and New Zealand are supporting promising young talents in this prestigious event which has been won in the past by Johnny Herbert (1985), Mark Webber (1996) and Jenson Button (1998), all of whom went on to win Formula 1 races, as well as two-time NTT INDYCAR SERIES champion Josef Newgarden, who carried the distinctive and patriotic Team USA Scholarship colors to victory in 2008.

American hopes also will be carried by 2021 Team USA Scholarship winner Max Esterson, from New York, N.Y., who finished a close second last year and continued to hone his skills this year after stepping up to GB3, plus Jeremy Fairbairn, from Wellington, Fla., Shaun Rashid, from Atlanta, Ga., and cancer survivor Gabe Tesch, from Mica, Wash.

Esterson and Rashid will run under the same Ammonite Motorsport banner as Budzinski, Ferguson and Schrage, who have gained experience of their Ray GR cars at a variety of venues in the UK, including Castle Combe, where they completed a successful exploratory race event three weeks ago, Pembrey and Snetterton. They also benefited from simulator tuition with RaceCraft1 Motorsport Training’s Kelly Jones before their UK trip, in addition to pounding out laps at Brands Hatch for the past three days, during which they have sampled a wide array of weather and track conditions.

“We’re so thrilled to welcome back Team USA for another year,” said Andy Low, who worked as a crew chief with Cliff and Michelle Dempsey for several years before taking over the organization upon the Dempseys’ retirement a few years ago and then rebranding the team as Ammonite Motorsport for the 2022 season. “Elliott, William and Thomas have settled in very well with the team. They’ve really got to grips with the cars and have done a great job on track so far.

“It’s great to see the guys experience the UK too. It’s been a fantastic cultural experience for them and I’m really impressed with how they’ve embraced the whole package of what the scholarship can offer.”

Needless to say, the drivers themselves are equally enthusiastic about their prospects.

“I’m very excited to get underway for the Formula Ford Festival,” said Elliott Budzinski, who has impressed despite minimal car racing experience prior to his UK trip. “To do well at this race everything has to come together.

“The team continues to do an amazing job and I believe I have made big strides in the car that will allow us to fight for the top spot on the podium.

“Brands Hatch is a truly special track, the elevation and character it has is unlike anywhere I’ve ever driven… but testing is one thing, I cannot wait to see how 80+ cars race here!

“I also cannot go without thanking Jeremy Shaw and the long list of Team USA Scholarship sponsors that allow us to compete in such an amazing event.”

“I have been waiting to race on such a historic track like Brands Hatch Circuit for all of my life,” added Thomas Schrage, who last weekend traveled back to the U.S. to clinch the FRP F1600 Championship at Pittsburgh

International Raceway with a convincing 11-second victory from pole. “This track is absolutely insane in wet conditions and has taught me a new driving style. I feel that I have a true chance to chase the gold this weekend, and I will be trying to do just that!”

“I’ve had an amazing couple weeks of testing with the 2022 Team USA crew thanks to Ammonite Motorsport,” said Ferguson (above), who finished second in this year’s Canadian F1600 Championship. “We’ve been to multiple tracks and experienced many different types of

conditions. Because of this, I feel well acclimated to this Formula Ford car and prepared for whatever obstacles and conditions that will be thrown at me this weekend. Having three days of testing at Brands Hatch already in the books, I’ve really gotten a feel for this amazing circuit.

“I really want to thank everyone involved in the Team USA program for putting together such an amazing opportunity for Elliot, Thomas and me. With two other Americans under the tent, and all five of us showing promising speed so far, we’re looking to put the stars and stripes on the top step of the podium come Sunday.”

The huge entry will be split into four 12-lap Heat races which will be held on Saturday afternoon after qualifying earlier in the day. The top 12 drivers from each Heat will qualify directly into the pair of 14-lap Semi Final races on Sunday. The 20-lap Final, set for 5:06 local time (five hours forward from EDT) will comprise 30 cars.

Click here for the event Final Instructions and here for the weekend schedule, although bear in mind times are subject to change. Live timing will be available at https://www.tsl-timing.com/event/224232.

The entirety of the racing action will be live streamed at https://www.youtube.com/watch?v=BUlQF64fBOk.