One year ago, Max Esterson carried Team USA Scholarship colors to second place in the 50th BRSCC Formula Ford Festival at Brands Hatch, with teammate Andre Castro taking third. This afternoon, Esterson, from New York, N.Y., went one better, making a step back from his GB3 campaign and emerging with the victory spoils, including the coveted Neil Shanahan Memorial Trophy, for Ammonite Motorsport after the Grand Final was red-flagged after just three laps following a torrential downpour. Esterson became only the second American to claim a Festival Final victory after Josef Newgarden carried Team USA’s patriotic red, white and blue livery to top Kent honors in 2008. 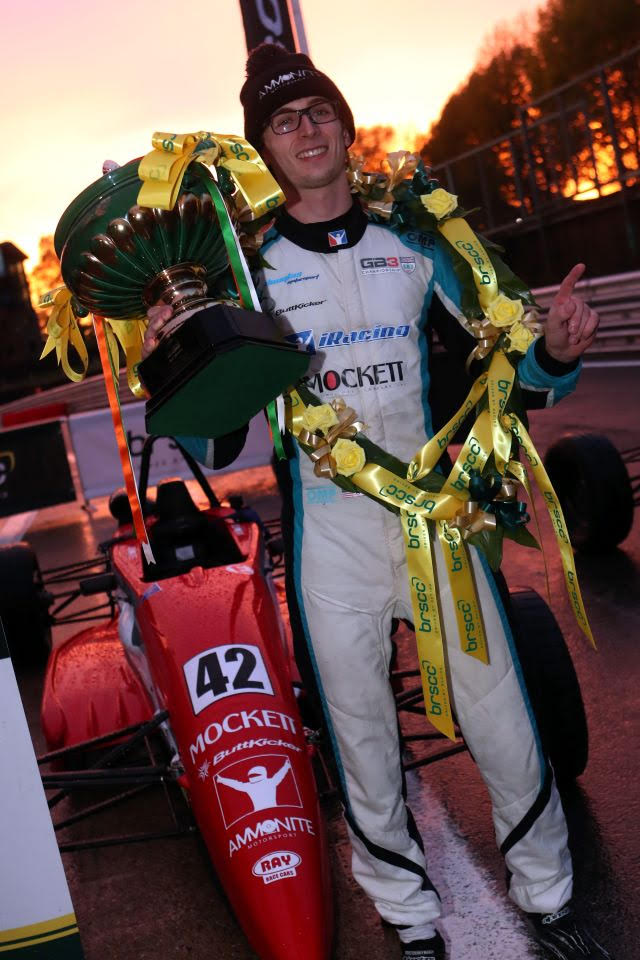 Max Esterson was fast qualifier and led every lap of three races to put his stamp on the 51st Formula Ford Festival.

This year’s Team USA Scholarship winners, Thomas Schrage and William Ferguson, also produced memorable performances. Schrage, 17, from Bethel, Ohio, finished third in his Semi Final race earlier this afternoon and was classified fourth in the Grand Final. Ferguson bounced back brilliantly from his incident on Saturday to dominate his Progression race, then overcame a poor start in his Semi Final to climb from 30th to 10th and secure a place in the Final.

The third Team USA driver, Elliott Budzinski, 20, from Ann Arbor, Mich., was in a position to advance to the Final before another untimely red-flag stoppage dropped him out of contention.

Another spectacular day of Formula Ford action began with a pair of Progression Races this morning for those drivers who were unable to qualify directly for the Semi Final round of the traditional knock-out competition. And the track conditions were completely different to Saturday following heavy rain. Ferguson lined up ninth on the grid after his Saturday incident, but began his charge to the front immediately. The Californian rose to second place by the completion of the opening lap before romping away to a clear victory over Team Canada Scholarship winner Jake Cowden, who narrowly beat Ferguson to this year’s Canadian Formula Ford Championship. 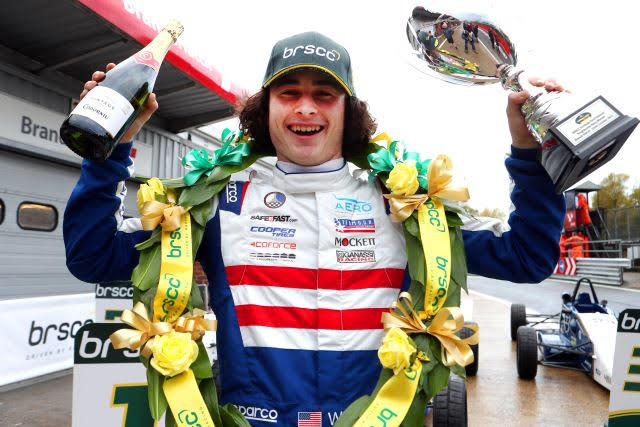 William Ferguson dominated his progression race to make the Semi-Final.

“I managed to pull a gap to Jake and then maintained it for the remainder of the race and grabbed the win,” recounted Ferguson. “Huge thanks to the Ammonite boys for getting the car back together after an unfortunate incident yesterday that put us in the barriers on the exit of Druids. We’re looking very strong for the Semi Final. Time to make up some more spots!”

Ferguson was good to his word. Despite a poor start which saw him plummet from 25th on the grid to 30th and last at the first corner, Paddock Hill Bend, Ferguson fought back magnificently, passing seven cars on the first lap and ending up a fine 10th to ensure direct qualification for the Final. The race was won by Michael Eastwell’s Kevin Mills Racing Spectrum 011C.

“Super comeback so far after an unlucky day yesterday,” said Ferguson, who posted the second fastest lap. “This means I made it into the Final, and I will start 20th. It’s a 20-lap race so there’s plenty of time to make it happen.” 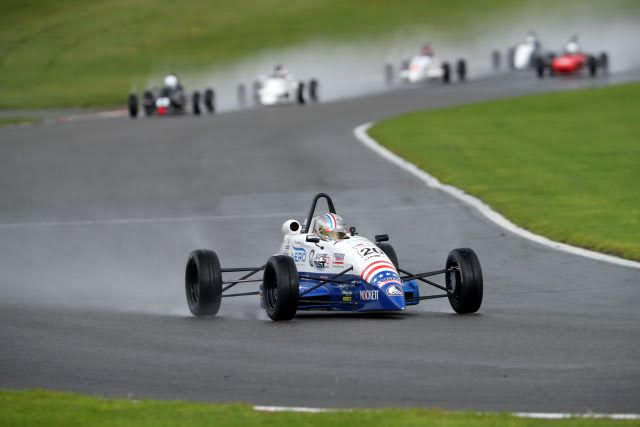 Fergusin passed that clatch of cars behind him in the Semi-Final.

Schrage and Budzinski contested the other Semi Final, lining up in fifth and 16th positions respectively on a still wet – but drying – track. An excellent first lap enabled Schrage to leapfrog to third place, after which he was embroiled in an entertaining battle with Jordan Dempsey (Kevin Mills Racing Spectrum) and veteran Joey Foster (Don Hardman Racing Firman) as Esterson romped clear in the lead.

Foster used his experience to dive inside Schrage at Paddock Hill Bend on the seventh lap, then battled past Dempsey and closed rapidly on the leader, Esterson, who held on for a narrow victory as the track rapidly began to dry. Schrage was equally impressive in fourth.

“I had a much better start than yesterday,” said Schrage, who set the third fastest lap of the race, fractionally slower than the race winner. “After an intense battle with Joey Foster, I brought home a fourth-place finish in a stacked lineup.”

Budzinski was less fortunate, being inadvertently tipped into a spin at the first corner as he attempted to pass veteran Roberto Moreno’s Ray. Budzinski resumed at the tail of the field and drove well to rise up to 17th by the completion, which ensured him a place on the grid for the Last Chance Race. 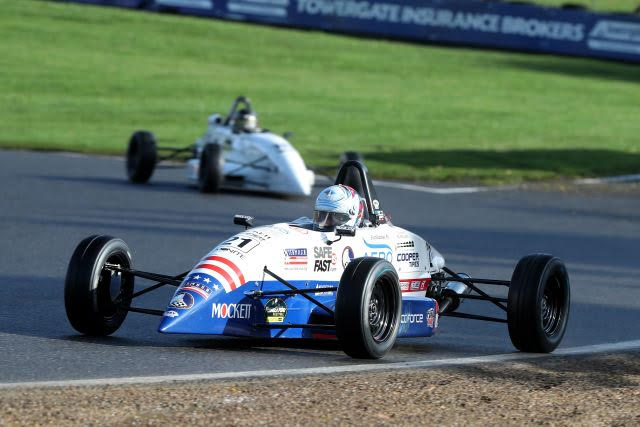 Not a totally satisfying weekend for Elliott Budzinski but a great learning experience.

Unfortunately, after rising from ninth to fifth on the first lap, a red flag was displayed, and the race restarted from the original grid positions. This time he made up only one place before the red flag flew again, leaving him two shy of a Final transfer.

“The Formula Ford Festival is over and it was definitely an experience,” said Budzinski. “I learned a lot and ended feeling quite good in the car. Unfortunately, I just made a few costly mistakes which took me out of contention for the Final, and a decent position at that. Overall though a lot of fun battles were had and the amount I have learned over the week was tremendous. Now it’s onto the Walter Hayes Trophy where hopefully I can clean up the mistakes and show what young American drivers have to offer with some hardware.” 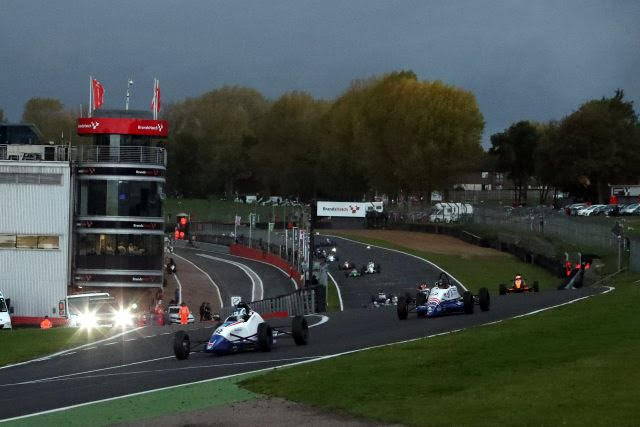 The Final was shortened due to heavy rain, lightening and dwindling twilight.

The Final began on a largely dry track but with threatening rain clouds looming ever closer. Schrage, from seventh on the grid, made up a couple of positions on the first lap and was right in contention when he tangled with Eastwell under braking for the Druid’s hairpin. Schrage somehow recovered from a major “moment”, but the red flags flew shortly afterward when the heavens opened, and with darkness not far away and the rain still falling heavily, the officials had little option other than to conclude the race early.

“I wish I had more laps to show my true pace with the leaders,” said Schrage. “A fourth-place finish at the 51st Formula Festival Festival still met my expectations for sure. Great job to Max Esterson on the clean sweep and amazing win. The Ammonite Motorsport crew has done amazing job with all the cars, I can’t thank them enough. Thank you to Jeremy Shaw and all the Team USA Scholarship supporters for allowing us three Americans to represent our nation in these great races.”

Ferguson lost a place during a hectic opening lap but had charged his way up to 16th when the race was stopped and was eventually classified 15th when the final results were declared after two laps.

“Well, not the greatest way to end a weekend,” said Ferguson. “It was going to be a good race for us, having put a rain setup on the car. We were prepared for the weather. Even before it started raining I was able to make up four spots and we knew that we had pace in the rain.

“Overall, it was a great weekend. To make it to the Final after being taken out in the first race was a win in itself. Huge congrats to Max for getting the win, awesome result for Ammonite. The team worked really hard all week and I’m very proud to be a part of it. None of this would be possible without their hard work as well from Team USA and all of our supporters.”