RRDC president Bobby Rahal was presented with the 7th annual “Spirit of Competition” Award at the Simeone Foundation Automotive Museum in Philadelphia on Oct. 29, at a dinner hosted by the Museum’s founder and Executive Director Fred Simeone. RRDC member Bill Warner was the M.C., and RRDC members in the audience included George Wintersteen, Archie Urciuoli and Judy Stropus. Warner and Simeone led a Q&A with Rahal, discussing his stellar racing career as a driver, team owner and father of IndyCar racer and RRDC member Graham Rahal. 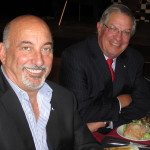 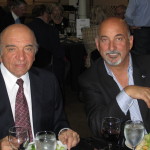 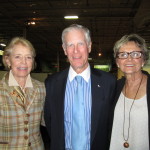 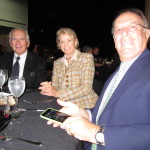 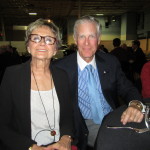 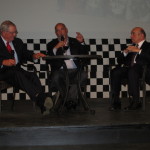 Thanks to RRDC member Murray Smith for providing us this report:
On Wednesday, Oct. 29, Dan Gurney was presented the Edison-Ford Medal for his ingenuity and innovative achievements at a very special ceremony held at the Henry Ford Museum in Dearborn, Mich. Several hundred guests, friends and family attended the event in a specially designed section of the Museum, featuring several of the most famous automobiles from Dan’s career, including the Lotus 38 with which Jimmy Clark won the Indy 500 and with which Dan was intimately involved – together with, in pride of place, the Ford Mk 4 with which Dan and A.J. Foyt won the 24 Hours of Le Mans in 1967.

Speaking of Pirelli World Challenge, RRDC member Corey Fergus will move over to the TC class of the reconfigured Pirelli World Challenge Series in 2015, which will air on CBS Sports Network. There will be three separate races, and Corey will compete in a Porsche Cayman for first overall in the TC/TCA/TCB race group. Other groups include GT (RRDC member Johnny O’Connell is the 2014 champion) and GTS (RRDC member Jack Baldwin is the 2013 champion). http://www.world-challenge.com/

YOUNG GUNS AND SONS OF MEMBERS

Harrison Newey, the 16-year-old son of Red Bull Formula 1 technical guru and new RRDC member Adrian Newey, will make his UK single-seater race debut in the BRDC Formula 4 Winter Series. Harrison will drive for the frontrunning HHC Motorsport team in the two-round series, which kicks off this weekend with four races at Snetterton. He made his race debut in the French F4 series last month at Circuit Paul Ricard, has undertaken multiple tests in a BRDC F4 car and was run by HHC for the first time at Snetterton last week. http://www.autosport.com/news/report.php/id/116625 – http://www.racer.com/international-racing/item/110585-adrian-newey-s-son-to-race-in-formula-4

Talented up-and-coming race car drivers Aaron Telitz from Birchwood, Wis., and Michai Stephens from Evanston, Ill., carried the colors of the RRDC and SAFEisFAST.com while playing starring roles in the recent Formula Ford Festival at Brands Hatch and the Walter Hayes Trophy events at Silverstone in England. The American duo were the latest winners of the Team USA Scholarship which was founded by RRDC member Jeremy Shaw in 1990. Past winners have included Jimmy Vasser, Bryan Herta, Buddy Rice, Andy Lally, JR Hildebrand, Dane Cameron, Conor Daly and Josef Newgarden. www.TeamUSAScholarship.org.