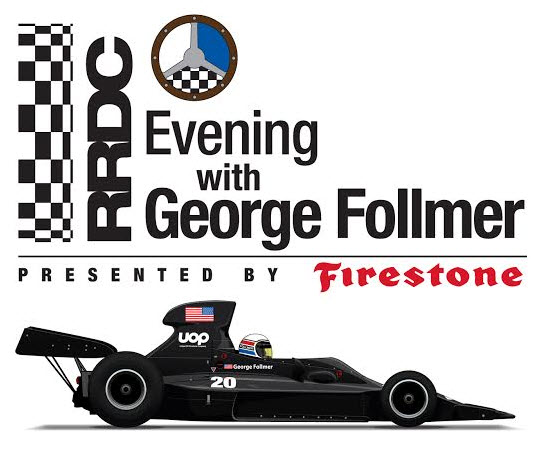 Hilliard, Ohio, April 11, 2016 – It’s George Follmer Week in Long Beach. Follmer, the only driver to have won both the Trans-Am and Can-Am championships in one year (1972), will be honored by the Road Racing Drivers Club at the “RRDC Evening with George Follmer presented by Firestone” in Long Beach, Calif., this Thursday, April 14, prior to the running of the Toyota Grand Prix of Long Beach. This is the RRDC’s eighth consecutive annual banquet honoring auto racing’s most influential leaders and icons.

Previous honorees were Dan Gurney, Parnelli Jones, Roger Penske, Jim Hall, Brian Redman, Mario Andretti and Bobby Unser. These “RRDC Evenings” are acknowledged as one of the highlights of the auto-racing social calendar, drawing fans and luminaries from all forms of motorsports.

The Firestone brand returns as presenting sponsor of the RRDC banquet for the seventh straight year. American Honda hosts the cocktail reception prior to dinner.

“When George Follmer got behind the wheel he expected to win and more often than not he did,” said Lisa Boggs, director of Bridgestone Americas Motorsports. “Whether it was Can-Am, Indy cars, Trans-Am or Formula One, George was a true racer’s racer, and Firestone is proud to recognize his career during this year’s RRDC Evening.”

The dinner’s proceeds will help support the RRDC’s young driver initiatives, including its groundbreaking SAFEisFAST.com program and the Team USA Scholarship, which the RRDC has backed since 1997 and has been providing opportunities for talented young American race-car drivers since 1991.

George Follmer’s reputation as a driver who “could drive the wheels off anything” is well-deserved and respected. He’s raced in Can-Am, Trans-Am, World Endurance, IndyCar, NASCAR, Formula One and IMSA, claiming the 1965 SCCA United States Road Racing Championship, as well as the above-mentioned 1972 Can-Am and Trans-Am titles. He again earned the Trans-Am crown in 1976.

In all, his career boasts 37 professional wins on 22 circuits in four countries.

Follmer’s first Formula One start in 1973 resulted in a sixth-place finish for the UOP Shadow team at the South African Grand Prix, followed by a third at the Spanish Grand Prix. He also placed second in both Can-Am and IROC that year.

“George Follmer was a champion who lived through the greatest era of sports-car racing, the ‘glory years’ of the ’60s and ’70s,” said Bobby Rahal, president of the RRDC. “His reputation for trading paint and bashing fenders was well documented and, remarkably, highly respected. His goal was to win, and he did!

“In 2012 the RRDC honored him with the Phil Hill Award,” continued Rahal. “George has received many awards in recent years, which he richly deserves. The RRDC is pleased to honor this living legend in Long Beach.”

“To be recognized by the RRDC for my many years in racing is certainly a thrill,” said Follmer. “And I’m glad to see Firestone continues to be the presenting sponsor of these terrific dinners. Personally, without Firestone’s support in 1965, my first year of pro racing, my career may not have happened. They made many things possible, and I will always be indebted to them. I look forward to a great evening with many of my peers and friends.”

The RRDC Evening with George Follmer presented by Firestone is set for Thursday, April 14, at the Hilton Hotel, 701 West Ocean Blvd, Long Beach, Calif., with Honda’s cocktail reception at 6 p.m. and dinner at 7:15 p.m.